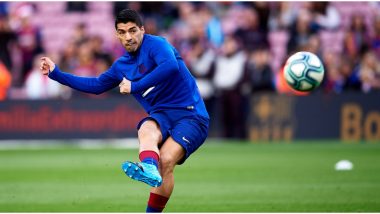 Montevideo, September 19: Barcelona striker Luis Suarez is among the 26 players named in Uruguay's squad for FIFA World Cup qualifiers against Chile and Ecuador slated to be played next month.

But there was no place for striker Edinson Cavani, who is yet to find a new club after parting ways with Paris Saint-Germain in June. The 33-year-old has not played since March. Sergio Aguero Injury Update: Manchester City Striker Could Miss the First Two Months of the Season, Feels Manager Pep Guardiola.

The South American zone World Cup qualifiers were originally scheduled to begin in late March but were suspended because of the Covid-19 pandemic. Uruguay will face Chile in Montevideo on October 8 before meeting Ecuador in Quito five days later.

(The above story first appeared on LatestLY on Sep 19, 2020 02:15 PM IST. For more news and updates on politics, world, sports, entertainment and lifestyle, log on to our website latestly.com).