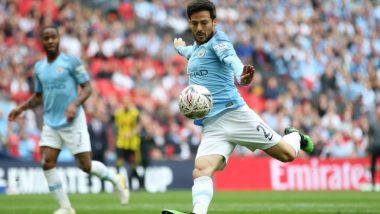 Manchester, July 26: Manchester City manager Pep Guardiola lavished praise on playmaker David Silva ahead of his last Premier League game against Norwich City on Sunday. The Spaniard had announced prior to the season that this year will be his last with the Premier League giants. When asked to explain Silva's career at the Etihad Stadium in one word, Guardiola told Man City's official website: "Extraordinary."

"The number of games, the huge quality in the games he played, the titles he helped win...he's alongside five or six others who made this Club what it is now. "And this club will always be grateful," he said. Silva joined City from LaLiga side Valencia in 2010 and has since gone on to win four Premier League titles and two FA Cups. He has also scored 77 goals and assisted 140 times so far for the club. David Silva Wants to Finish After 10 Seasons at Manchester City, Says Pep Guardiola.

Guardiola had earlier confirmed that Silva will return to Etihad Stadium for a farewell match once fans are allowed back into the stadium. Football matches across Europe are taking place currently behind closed doors in wake of coronavirus pandemic.

"He is coming back for the farewell game in front of all the fans because he is an incredible legend. They could name a street, a pitch, a statue (after him) - this is not my business," Guardiola had said earlier this month.

"David is maybe the best in small spaces, moving between lines, I've never seen anyone like him. He came back from lockdown in incredible form and rhythm. If he decides to play on, he can play anywhere - no doubt.

"The young players have learned by David's example. He is someone who doesn't talk much but he leads by example. He's a huge competitor," the former Barcelona and Bayern Munich manager said.

(The above story first appeared on LatestLY on Jul 26, 2020 08:25 PM IST. For more news and updates on politics, world, sports, entertainment and lifestyle, log on to our website latestly.com).