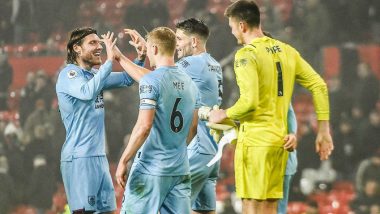 Manchester, January 23: Burnley pulled off the biggest surprise in Premier League action, scoring once in each half to defeat Manchester United 2-0 at the Old Trafford.

Struggling Leicester City also got back on track with an easy win over West Ham United. Man United struggled to defend Burnley's free-kick opportunities in the first half, with Chris Wood nearly converting one chance when his header went just wide of the post in the 24th minute.

But in another dead-ball play 15 minutes later, Wood scored on a left-footed volley past United goalkeeper David de Gea after receiving a headed pass from Ben Mee.

The home side also had good chances to score in the first half, the best of which came on a header by Daniel James that Burnley goalie Nick Pope tipped over the crossbar.

Burnley then stretched their lead to 2-0 thanks to a remarkable strike by Jay Rodriguez, who received a ball on the edge of the box, dribbled into the area and sent a left-footed blast into the top corner of the goal past De Gea.

United's frustrating day at the office continued when an apparent goal by substitute Luke Shaw in second-half stoppage time was ruled out by VAR, which determined that the left back had fouled a defender on the play.

With the win, Burnley (30 points) climbed to No. 13 in the Premier League standings. Man United (34 points) are still in fifth place but could fall to sixth if the Wolves are able to pull out a win or draw at home against undefeated first-place Liverpool on Thursday.

In other action Wednesday, the Spurs scored for the first time this year in a Premier League match when Dele Alli put home a close-range shot off a pass from Serge Aurier in the 38th minute.

Norwich's best chance before the intermission at Tottenham Hotspur Stadium in North London came on a shot by Finnish striker Teemu Pukki that went just wide of the post.

Despite having the lead at the break, Tottenham's struggles in the final third - exacerbated by the absence of injured star striker Harry Kane - allowed Norwich to stay within striking distance.

The visitors proceeded to put pressure on Jose Mourinho's men in the early juncture of the second half and then eventually tied the game in the 70th minute when Pukki converted from the 12-yard mark after Ryan Sessegnon was called for a foul on Max Aarons in the area. Maurizio Sarri Wants to Help 'Champion' Cristiano Ronaldo Win Sixth Ballon d'Or.

The Spurs, however, finally got a ball to bounce their way nine minutes later. After a shot by Alli had looped toward him off of a deflection, Son was able to head the ball into the back of the net and give Tottenham their first Premier League win in nearly a month.

With the victory, Tottenham (34 points) moved up to sixth place, slightly behind Man United on goal differential. Norwich City, meanwhile, remained six points from safety and look as if they may be heading back to the second division after just one season in England's Premier League.

After Mark Noble had narrowed the Foxes' lead to 2-1 with a goal early in the second half, Ayoze Perez put the game out of reach by scoring two late goals, including one from the penalty spot.

(The above story first appeared on LatestLY on Jan 23, 2020 09:35 AM IST. For more news and updates on politics, world, sports, entertainment and lifestyle, log on to our website latestly.com).