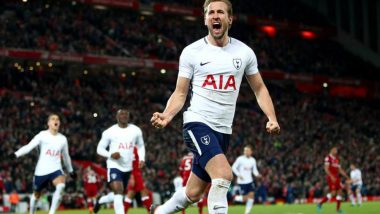 Harry Kane has been one of the most important players for Tottenham Hotspur since bursting out on the scene on 2014-15 season. He was appointed as the regular first-team captain of the north London team couple of years back but it looks like the England striker is now seeing a potential move away from the club. Jose Mourinho, who was appointed as the new manager in November after the sacking of Mauricio Pochettino, has a rebuilding job to do from next season but Harry Kane prefers joining Manchester United over that. Harry Kane Sidelined Till April Due to Rupture in Left Hamstring.

According to a recent report from Goal, Harry Kane is considering a move to record Premier League Champions Manchester United. It is understood that the 26-year-old is reluctant to wait for a complete overhaul of the Spurs squad before challenging for trophies and currently sees his future at Old Trafford. Tottenham Hotspur played in the Champions League final last year, but chances of qualification for the prestigious competition this season are becoming bleaker after each passing matchday. Erling Haaland Offers Transfer Hope to Real Madrid and Manchester United.

Kane is currently out of action due to a hamstring injury and is expected to remain on the side-lines until the end of the season. England forward has a contract with the North-London club until 2024 but a hefty transfer fee could see Chairman Daniel Levy be tempted to sell their star player.

Tottenham Hotspur lost Christian Eriksen to Inter Milan in January and losing Kane will be a huge blow to Jose Mourinho and his future plans for the club. Champions League football next season will be a crucial role in this deal. Harry Kane has scored 181 goals for the club so far but is yet to win a single major honour in his career.

(The above story first appeared on LatestLY on Mar 05, 2020 06:21 PM IST. For more news and updates on politics, world, sports, entertainment and lifestyle, log on to our website latestly.com).