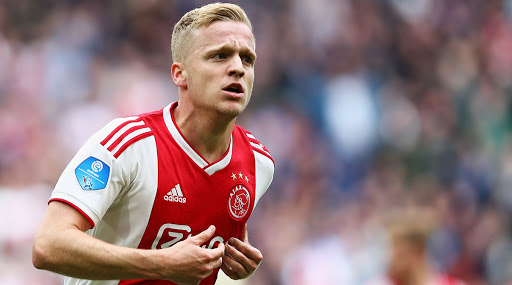 Manchester United are interested in signing Ajax midfielder Donny van de Beek in the upcoming transfer window as they look to strengthen their squad. The Red Devils came under a lot of scrutiny after their 3-1 defeat against Manchester City in the first leg of Carabao Cup 2019-20 and this might have tempted the board and manager to look for reinforcements. Solskjaer admitted after the defeat that he has been given the green light to make signings during the January transfer window. The Dutch midfielder appears to be a top priority for the record English champions. Paul Pogba, Manchester United Midfielder Mistakes Urine for Apple Juice in Social Media Video.

According to reports from ESPN, Manchester United and Ole Gunnar Solskjaer are confident of signing Van de Beek from Ajax in the January transfer window. But the 22-year-old will not come cheap as the Premier League club might have to pay a transfer fee of over 50 million Euros. The midfielder was an important part of the Ajax side that reached the Champions League semi-finals last season. Van de Beek has scored eight goals in 26 games across all competitions for Ajax so far. The Dutchman’s ability to score goals from midfield has made him one of the top priorities for the English giants. Manchester City Fans Mock Ole Gunnar Solskjaer After Their Team Thrash Man United 3-1 in Carabao Cup Semis, Angry Netizens Too Slam Red Devils Manager!

United are looking to strengthen their midfield and possibly find a replacement to Paul Pogba, who is also linked with a move away from Manchester for some time now. Failure to qualify for the knockout stages of the Champions League may force Ajax to sell some of their key players and Donny van de Beek could be one of them if the right offer arrives.