The Frenchman, who has had a lack of playing time at Manchester United in recent times, would head to Spain in order to revive his club career. A good performance for Sevilla can help him be in contention for a spot in France's World Cup squad later this year. 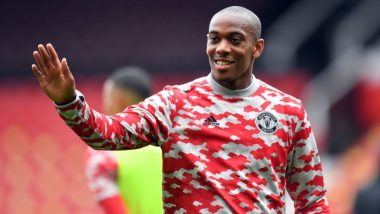 Manchester United striker Anthony Martial is all set to leave the club and join Sevilla on loan, according to reports. The Frenchman would be seen in action in La Liga for the remainder of the season with both Manchester United and Sevilla agreeing on a loan deal. Sevilla would pay Martial's wages till June.  This development comes after Manchester United had reportedly turned down the Spanish club's request for a loan deal a while ago. Also, this deal does not have an option to buy and Martial would be returning to England after the season ends. Noted Italian football journalist Fabrizio Romano confirmed this development stating that Martial's priority was Sevilla and an agreement was reached upon.

Anthony Martial from Manchester United to Sevilla, done deal and here we go! Agreement reached tonight between the two clubs. Player has accepted, Sevilla was his priority. ⚪️🔴 #Sevilla

Sevilla will cover his salary until June. Martial will fly to Spain in the next hours. #MUFCpic.twitter.com/a5U392Es3k

The striker's move to Sevilla would help him gain some important playing time and an impressive performance in Spain could significantly increase his chances of earning a call-up to the France national team for the World Cup in Qatar later this year.

It can also be understood that Cristiano Ronaldo's return to Old Trafford this summer had Martial drop down the order. He had reportedly discussed his future at United with interim manager Ralf Rangnick, expressing concerns due to a shortage of minutes. Rangnick himself stated that Martial refused to be part of the side while referring to United's matchday squad to face Aston Villa in the Premier League. “He didn’t want to be in the squad,” the German tactician had said. But the Frenchman hit back, refuting all of those claims. Taking to Instagram, he wrote, “I will never refuse to play a match for Man United. I’ve been here for seven years and I never disrespected, and will never disrespect, the club and the fans.” As a matter of fact, his first minutes under the new German coach at United came in the club's 1-0 win over West Ham on January 22.

(The above story first appeared on LatestLY on Jan 25, 2022 10:04 AM IST. For more news and updates on politics, world, sports, entertainment and lifestyle, log on to our website latestly.com).