The star forward could end up following Sadio Mane in making his Liverpool exit this summer. Salah has one year remaining on his Liverpool contract and if he does not sign a new deal, then the Reds stand a chance of losing him for free next summer. 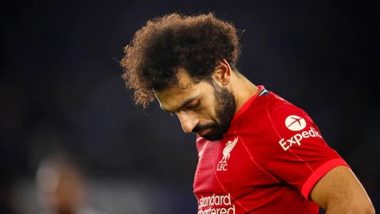 After losing Sadio Mane, Liverpool are reportedly set for another huge blow with Mohamed Salah likely to leave the club. According to a recent report in the Sun, the Egyptian can follow Mane's way in making his Anfield exit if the club receives a suitable offer for the forward. Salah had earlier stated that he would continue at Liverpool this season amidst talks of a new contract with the club having hit a deadlock. With one year remaining on his current deal, Liverpool are likely to cash in on him rather than seeing him leave for free next summer if they fail to convince him to sign a new contract. Cristiano Ronaldo Transfer News: Bayern Munich Looking at Portugal Star As Replacement for Exit-Bound Robert Lewandowski

A transfer fee in the region of £60million is reported to be enough for Liverpool to listen to offers for the star forward. The Reds have some exciting attacking talent in their squad but the possibility of losing both Salah and Mane in one window would be no less than a huge blow, if the talismanic Egyptian ends up leaving the club. With both these players potentially missing, Liverpool chances of challenging for major titles can also take a hit.

It was also reported that Real Madrid were among the ones to monitor Salah's situation at Liverpool. The Egyptian was in fine form last season, ending up with the highest goals and assists' in the Premier League. Real Madrid, who had earlier missed out on signing Kylian Mbappe, would be more than happy to bring in a player of equal, if not greater caliber. Barcelona had also reportedly shown interest in signing Salah.

(The above story first appeared on LatestLY on Jun 25, 2022 09:45 AM IST. For more news and updates on politics, world, sports, entertainment and lifestyle, log on to our website latestly.com).