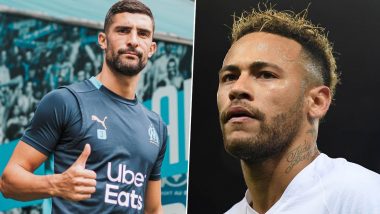 Neymar Jr was one of the five players to be sent off during a few chaotic final minutes in the Paris Saint-Germain vs Marseille game at the Parc des Princes Stadium on Sunday. After the interference from VAR, the Brazilian was given his marching order for hitting defender Alvaro Gonzalez, who was accused by PSG forward of racism. Neymar Jr Regrets Not Hitting Marseille Defender in the Face After Alleged Racism Incident (Watch Video).

Neymar Jr was shown a red card by the referee after consultation of VAR in the final minutes of PSG’s 1-0 loss to Marseille. While walking off the field, the 28-year-old confronted the fourth official accusing the Spanish player of racism and also hit back at the match officials and the Marseille player on his social media following the match. Marseille 1–0 PSG, Ligue 1 2020–21 Match Result: Andre Villas Boas’ Side End Nine-Year Winless Run Against Old Rivals Paris Saint-Germain.

However, Alvaro Gonzalez was quick to defend himself from Neymar’s comment after the game as he shared a picture with his team-mates and also hit back at the Brazilain asking him to accept defeat on the field.

‘There is no place for racism. A clean career and with many team-mates and friends on a day to day basis. Sometimes you have to learn how to lose and accept it on the field. Incredible three points today, Allez l'OM, thank you family,’ the Spaniard tweeted.

Marseille coach Andre Villas-Boas also leapt to Gonzalez's defence after the match, while criticising the behaviour of PSG attacker Angel Di Maria. 'I don't know. I hope not, there is no place for racism in football,' Villas-Boas said in an interview with Telefoot.

‘It's a serious fault if it happened but I don't think so. Before that, we had a situation with a spit from Di Maria. These are things to avoid in the world of football. I hope it won't be a black spot in this historic performance.’ Said the manager.

(The above story first appeared on LatestLY on Sep 14, 2020 11:24 AM IST. For more news and updates on politics, world, sports, entertainment and lifestyle, log on to our website latestly.com).