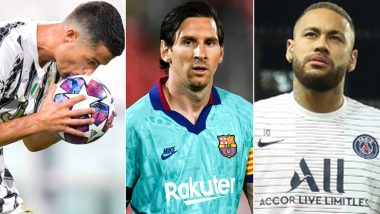 Neymar Jr recently snapped ties with Nike after 11-year-old long and now has joined Puma as the brand ambassador last month. After this, he has surpassed Cristiano Ronaldo and Lionel Messi in terms of their earnings from their respective brands. According to The Daily Mail, Neymar has signed a deal with Puma is worth an astronomical £23 million a year. Which is quite a lot as compared to Lionel Messi and Ronaldo. Messi currently earns £18 million a year from his partnership with Adidas. The former Manchester United superstar currently pockets £15 million a year which is quite less as compared to Neymar’s current contract. Neymar Jr Regrets Not Hitting Marseille Defender in the Face After Alleged Racism Incident (Watch Video).

While signing on with the brand the PSG forward had said that his brand has a long history with the likes of  Pele, Cruyff, Matthaus, Eusebio and Maradona and this was one thing which was important to him. “I wish to bring back the legacy that those athletes created on the pitch," said Neymar while signing on for the brand. In a statement, PUMA explained that "as one of the most successful athletes of his generation, Neymar will wear PUMA’s legendary King football boot on the pitch. He will also be a brand ambassador off-pitch, wearing PUMA’s most important lifestyle, training, and sport-inspired footwear and apparel products."

(The above story first appeared on LatestLY on Sep 21, 2020 01:39 PM IST. For more news and updates on politics, world, sports, entertainment and lifestyle, log on to our website latestly.com).