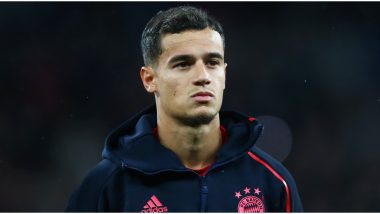 Everton have emerged as a surprise front-runner to bring Philippe Coutinho back to England. Coutinho, who swapped Liverpool for Barcelona in 2018, is currently on loan at Bayern Munich and is looking at possibilities of making a return to the Premier League where he excelled first under Brendan Rogers and then under Jurgen Klopp. Barcelona are also looking at options to offload the midfielder after being left disappointed with the Brazilian’s performances since his arrival for a record £130million. While Chelsea are said to have already been in talks with the La Liga giants for securing Coutinho’s signature this coming summer window, Everton are reportedly the only club which has agreed to meet Barcelona’s demands. Philippe Coutinho Transfer Update: Chelsea Close In on Signing of the Brazilian Midfielder.

Coutinho initially excelled in his first season at Barcelona and was also part of the side that won a domestic double with the La Liga title and the Copa del Rey win. But moved into the left wing at the start of the 2018-19 season, Coutinho struggled to produce the same numbers he did at Liverpool and in his debut season at Camp Nou. He still won the league title but was offloaded to Bayer on a season-long loan at the start of the 2019-20 season. In Germany, he has shown glimpses of brilliant past but still looks far from the player he was at Merseyside.

Everton are, however, said to have full faith in his abilities and are willing to agree to Barcelona’s demand for an initial loan with an obligation to buy. The Catalan club’s demand for sending the player on an initial loan deal has already seen Bayern refuse to extend the one-year loan deal while Liverpool are also said to be off after showing initial interest.

A report from Daily Mail UK said that Everton are willing to take the risk with the Brazilian despite his sour past on the other half of the Merseyside. The club believes that Coutinho’s signing could spark the transformation of the club under Carlo Ancelotti. The Italian has already lifted the Toffees from a relegation threatening battle to fighting for a European place next season.

The good relationship between Camp Nou and Goodison Park is also seen as one factor that could help Everton stealing Coutinho from Chelsea’s grasp. Andre Gomes, Yerry Mina and Lucas Digne have already joined Everton from Camp Nou in the recent transfer windows and Coutinho could well be the next.

(The above story first appeared on LatestLY on Apr 24, 2020 05:49 PM IST. For more news and updates on politics, world, sports, entertainment and lifestyle, log on to our website latestly.com).