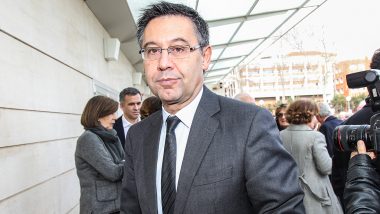 Barcelona, July 8: Barcelona manager Quique Setien will remain in charge of the Catalan giants next season despite the team stumbling in its bid to defend their LaLiga title a second consecutive time, the club's president Josep Maria Bartomeu said. Bartomeu said that he doesn't regret the decision of sacking ex-manager Ernesto Valverde either.

"Setien will obviously continue. At this moment I'm pretty happy with how the team has evolved and in the last couple of games we have seen the improvements Setien has made," Bartomeu told radio station Rac1 on Tuesday.

"I don't regret the decision to sack Valverde, we needed to give the team a boost and Setien has brought new ideas and new sensations with him," he added.

Draws against Sevilla, Celta Vigo and Atletico Madrid has led to Barcelona trailing leaders Real Madrid by four points. Bartomeu however said that their 4-1 win at Villarreal shows that the team is moving in the right direction.

Setien himself said he did not think his position had been under threat and was pleased with the football they have been playing.

"I didn't have the feeling things were going to change, I have gotten used to this circus," he told a virtual news conference ahead of Barca's match with Espanyol on Wednesday.

"I just do my job and I get the feeling the board are happy with the work we are doing and so am I."

(The above story first appeared on LatestLY on Jul 08, 2020 08:38 AM IST. For more news and updates on politics, world, sports, entertainment and lifestyle, log on to our website latestly.com).