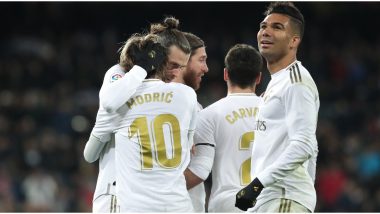 Madrid, June 6: The Seville derby will kick off the restart of LaLiga Santander and squads are now training in full groups. A round-up of all the biggest news out of LaLiga this week:

The Seville derby, Sevilla FC vs Real Betis, will mark the restart of LaLiga Santander next week at 22:00 CET on Thursday June 11. Other matches to watch on the first round of matches back include the Valencia derby between Valencia CF and Levante UD (22:00 CET, Friday June 12) and Athletic Club vs Atletico de Madrid (13:00 CET, Sunday June 14).

The beginning of group training sessions represents another step forward in the strict Training Protocol developed by LaLiga in coordination with the Spanish High Sports Council (CSD), which comprises four clearly differentiated stages. The first began in early May, when medical tests were conducted on all LaLiga Santander and LaLiga SmartBank clubs and individual training began. Weeks later, on May 18, training in small groups of up to 10 players began, which was increased to 14 shortly after. The fourth stage, which starts this Monday, is the final step of the protocol leading up to clubs restarting the competition on June 11.

The Most Valuable Football Club

KPMG's latest report on the values of football clubs has been released and LaLiga clubs continue to lead the way. LaLiga side Real Madrid are ranked top, valued at €3.478 billion; FC Barcelona follow in third valued at €3.193 billion; and Atletico de Madrid in 13th valued at €1.197 billion.

Athletic Club and Gaizka Garitano have come to an agreement to extend the coach's contract until 2021. Garitano took over in Bilbao in December of 2018 and saved the Basque side from the threat of relegation before impressively leading them to the as-yet unplayed Copa del Rey 2019/20 season.

There was some disappointing injury news for Atlético de Madrid this week, with winger Ángel Correa picking up a muscle injury in his left leg. Amazingly, this is the Argentine's first injury in five years.

Levante Granted Permission to Finish the Season in Alicante

With the 2019/20 season set to be played out behind closed doors, the three-month postponement had looked to put a spanner in the works of Levante UD's planned stadium refurbishment over the summer. The Valencia side have, however, been given permission to play their home games at the Estadi Olimpic Camilo Cano near Alicante to allow these crucial works to go ahead.

Óscar Plano Extends His Stay at Real Valladolid Until 2023

There was reason to celebrate at Real Valladolid this week as midfielder Óscar Plano came to an agreement over a contract extension. This has been in the works for some time and it was finally announced that the 29-year-old has put pen to paper on a new deal that runs until 2023.

While the priority right now is to complete the 2019/20 campaign, LaLiga has also begun to look ahead to the 2020/21 season. LaLiga President Javier Tebas revealed this week that he hopes to start the domestic campaign next season on September 12, around one month later than it would usually start.

(The above story first appeared on LatestLY on Jun 06, 2020 10:10 PM IST. For more news and updates on politics, world, sports, entertainment and lifestyle, log on to our website latestly.com).