Liverpool and Real Madrid have met only five times in Europe’s premier competition surprisingly and Liverpool lead 3-2 head to head against Madrid, and interestingly the two sides are yet to play out a draw which speaks volumes of their love for attacking the football. 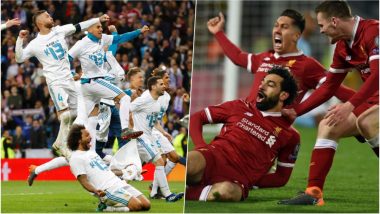 After a long hiatus of seven years, an English team has made it to the finals of a UEFA Champions League as Liverpool held on to a 7-6 aggregate win over AS Roma. The encounter in Kiev at NSC Olimpiyskiy promises to be a mouth-watering affair as defending champions Real Madrid await Merseyside club in the final after having overcome German giants Bayern Munich 4-3 in the semis to reach their consecutive CL finals in the last three years. Both sides have depicted strong attacking football in this season’s Champions League 2018 with pretty averaging defending at times so the final in Kiev may make up for a pretty open contest. In this article, take a look at everything to know before Real Madrid vs Liverpool fixture scheduled on May 27. From Road to Finals, Head-to-Head and our UEFA Champions League 2018 final winner prediction.

Liverpool and Real Madrid have met only five times in Europe’s premier competition surprisingly and Liverpool lead 3-2 head to head against Madrid, and interestingly the two sides are yet to play out a draw which speaks volumes of their love for attacking the football. For Liverpool, it is the trio of Mo Salah, Roberto Firminio and Sadio Mane who have done wonders on the field scoring 29 goals between them. Their efforts have made Liverpool the top scorers in UEFA Champions League history, and the arrival of Virgil Van Dyk in the January transfer window has somewhat steadied the ship at the back for Liverpool.

Real Madrid, on the other hand, have had a very disappointing season under their inspirational manager Zinedine Zidane to say the least with poor domestic form leading them to relinquish the La Liga title at a very early stage. But it is the European stage that has provided the platform for the Los Blancos to revive their failing fortunes. Cristiano Ronaldo has been instrumental in Madrid progress to the finals scoring 15 goals including crucial ones against Juventus and PSG in the knock out phase. The midfield trio of Casemiro, Luka Modric and Toni Kroos form the heart of the side and form of Sergi Ramos has been crucial too for the Spanish giants.

The final between the two sides will invariably come down to who can absorb the pressure better between the two sides. At the biggest stage of any Football extravaganza what is needed is experience and calmness on the ball. When we look at the Real Madrid side, we see many players who have been there and done that but the Liverpool lot only have youth and energy in them but lack experience. Few seasons ago they were done in by Sevilla in the finals of the UEFA Europa League where their playing style was questioned a lot.

Although this Liverpool side has changed a lot since then and Mo Salah has been a revelation of sorts for Jurgen Klopp and co, the back four still looks shaky. Real Madrid just might snatch the trophy from Liverpool and deliver the ultimate heart break to the Reds.

(The above story first appeared on LatestLY on May 03, 2018 02:30 PM IST. For more news and updates on politics, world, sports, entertainment and lifestyle, log on to our website latestly.com).