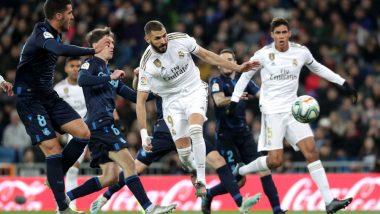 With all eyes on the top of the Liga Liga 2019-20 points table, Zinedine Zidane's team is all set to travel to Real Sociedad. Zidane has called up 23- members for the upcoming match and the clash is about to happen at the Reale Arena. With this, they can take the lead on the La Liga 2019-20 points table especially after Barcelona ended their game against Sevilla with a draw. The hosts were quite strong in the first half, however, they struggled in the second half too. Now, in this article, we bring to you the predicted line-up of the match, but before that, let's have a look at the preview of the match below: La Liga 2019-20 Updated Points Table: Atletico Madrid Takes Over 3rd Position in La Liga After Their Win Over Valladolid.

Real Sociedad is placed on number six of the points table with 47 points in his kitty. The team is played 29 games so far and have won 14 matches drawn five and have lost the remaining ones. Real Madrid is placed on number two of the La Liga 2019-20 points table with 62 points in their kitty. The Los Blancos have played 29 games and have 18 of them. The team has lost only three games and the rest of them ended with a draw.

Now, let's have a look at the squads of both teams:

(The above story first appeared on LatestLY on Jun 21, 2020 03:59 PM IST. For more news and updates on politics, world, sports, entertainment and lifestyle, log on to our website latestly.com).