Alessio Romagnoli snatched a late win after earlier conceding an own goal as AC Milan moved fourth in Serie A with a 2-1 win over Genoa. 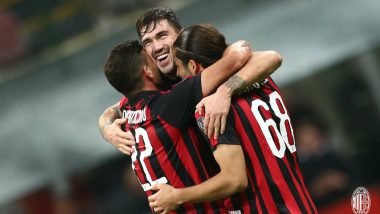 Milan, November 1:  Alessio Romagnoli snatched a late win after earlier conceding an own goal as AC Milan moved fourth in Serie A with a 2-1 win over Genoa. The match between the two teams had been postponed following the Genoa bridge collapse in August which killed 41 people. "I'm sorry for my own goal, but I made up for it," said Romagnoli. Gennaro Gattuso's side overtakes Lazio on goal difference with 18 points from ten games ten points behind leaders Juventus and four points behind Napoli in third. Cristiano Ronaldo Becomes First Footballer to Net 400 Goals in Europe’s Top Five Leagues As Juventus Held to 1–1 Draw by Genoa.

"It's a step, now we have to stay there," said Gattuso, whose side had been in the tenth position before the international break. "We know it's difficult, but after everything we've been through, it's something important." Spanish forward Suso had put the hosts ahead after four minutes but Gattuso's side then suffered, with Romagnoli turning into his own net after 56 minutes after a mixup with on-loan Chelsea midfielder Tiemoue Bakayoko.

Genoa goalkeeper Andrei Radu proved solid denying Gonzalo Higuain and Franck Kessie, but was finally beaten by Romagnoli who volleyed over the Romanian keeper who had punched a shot clear of goal. "We've been criticised too much. Results are what count and we've got another. We must improve and stay near the top," said Romagnoli. Genoa drops to 11th position after their fourth defeat of the season.

(This is an unedited and auto-generated story from Syndicated Newsfeed, LatestLY Staff may not have modified or edited the content body)