Serie A 2020-21: Napoli Win Appeal To Replay Abandoned Clash Against Juventus After No Show Due to COVID-19 Outbreak

CONI (Italian National Olympic Committee), on Tuesday, determined that the previously abandoned Napoli vs Juventus match will be replayed and Napoli's previously deducted point will be restored. This means, Juventus’ points tally will drop down to 24 points and Napoli will go on level with the Turin club in the team standings. 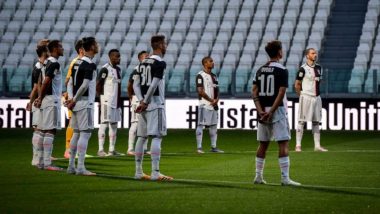 Napoli have won the appeal to replay their match against Juventus after the original tie was deemed forfeit. The Turin club were handed all three points by the Italian federation as the Naples-based club were unable to travel for the game due to a sudden increase in positive COVID-19 cases amongst the squad. The initial fixture between the team was scheduled to be played on October 4 in Turin. Andrea Pirlo Slams Team Juventus After Humiliating 2-0 Loss Against Fiorentina, Questions the Attitude of the Players.

After the original fixture between the teams was abandoned, Juventus were adjudged as 3-0 winners. In addition, Napoli were further punished as one point was deducted from the club's tally for not traveling to the game with Serie A and Italian Federation (FICG) stating that Napoli’s inability to adhere to COVID-19 protocols and not show up for the game was their own doing.

Just days before their clash against Juventus, Napoli had played Genoa which saw a steep increase in coronavirus cases in both camps following which the club from Naples claimed that they were unable to travel to Turin after being legally ordered by local authorities. On Tuesday, the Italian National Olympic Committee ruled in their favour as per several reports.

CONI (Italian National Olympic Committee) determined that the match will be replayed and Napoli's previously deducted point will be restored. This means, Juventus’ points tally will drop down to 24 points and Napoli will go on level with the Turin club in the team standings.

Juventus suffered a 3-0 defeat against Fiorentina in their latest league fixture, which has seen Andrea Pirlo’s team fall seven points behind leaders AC Milan. Napoli have also climbed above the Turin side in the table due to goal difference and also have a game in hand over the record Italian champions.

(The above story first appeared on LatestLY on Dec 23, 2020 03:48 PM IST. For more news and updates on politics, world, sports, entertainment and lifestyle, log on to our website latestly.com).