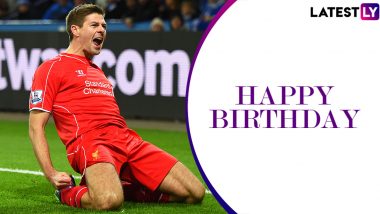 Arguably Liverpool’s greatest player of the 21st century, Steven Gerrard will celebrate his 40th birthday today (May 30, 2020). Born in Whiston, Merseyside, the England icon is the ultimate one-club man and made his debut for boyhood side Liverpool in 1998 and spent 17 seasons at the club. Considered as one of the greatest players of his generation, the midfielder is mostly known for his versatility and his long-range strikes. So on Steven Gerrard’s birthday, we take a look at some of his best goals. Paul Scholes Likens Manchester United Midfielder Paul Pogba to Liverpool Legend Steven Gerrard, Says ‘He Can Do Everything as a Midfield Player’.

Widely regarded as one of the best players to ever come out from England, the footballer has been the cornerstone of the Merseyside club for several years and has led them to various honours including a Champions League triumph in 2005. As a box-to-box midfielder, Gerrard was effective both on the defensive as well as the offensive front. Since his debut for Liverpool as an I8-year-old, the midfielder always had the knack of scoring important goals, which includes strikes in three FA Cup finals and a UCL final, so lets take a look at some of them.

Against Newcastle United, Steven Gérard pulled one out of the hat as he produced a sensational free-kick. Lucas Leiva rolled the ball to Liverpool's number 8 and the captain struck the ball as sweetly as he can from about 40 yards, straight into the top corner.

One of the biggest rivalries in the league and with Liverpool being 1-0 down, a young Steven Gerrard announced himself to the Liverpool faithful as got his side on level terms. From an acute angle, Gerrard let fly with his right foot, giving the keeper no chance in the goal.

The goal was an important one for Liverpool in that season as it put the Reds through to the knockout stages of the competition. The Premier League side needed to win with a two-goal margin and the midfielder with a wonder strike did just that.

The night in Istanbul, and who else other than Steven Gerrard to inspire his beloved side to one of the greatest comebacks in the competition's history. With 3-0 down, Gerrard scored off a John Arne Riise cross which was the beginning of the fight back. Liverpool went on to level the game in normal time and win it on penalties.

(The above story first appeared on LatestLY on May 30, 2020 08:00 AM IST. For more news and updates on politics, world, sports, entertainment and lifestyle, log on to our website latestly.com).