Paul Scholes Likens Manchester United Midfielder Paul Pogba to Liverpool Legend Steven Gerrard, Says ‘He Can Do Everything as a Midfield Player’ 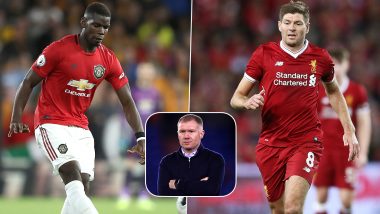 Manchester United legend Paul Scholes has compared midfielder Paul Pogba to his former England teammate and Liverpool great Steven Gerrard. Pogba “can do absolutely everything” and boasts of the many traits that made Gerrard a football legend believes the former United player, who spent five years with Gerrard in the England national team and trained with Pogba when the latter was promoted to the United first team. Pogba joined United on a club-record transfer fee from Juventus four years after leaving Old Trafford for more first-team football. But the World Cup-winning Frenchman has drawn plenty of criticism for his inconsistency and fuelling rumours about his transfer. Paul Pogba Reveals Reason Behind Leaving Manchester United in 2012.

Pogba, 27, had spent the majority of the 2019-20 season on the treatment table and was supposed to return to playing towards February end before coronavirus pandemic struck and forced the season to be suspended. Pogba though has failed to meet expectations whenever he has played since his arrival from Turin for a record £89 million. Pogba, a four-time Serie A winner with Juventus and a World Cup winner France has also struggled with form and fitness throughout hid time with the Red Devils. Robin van Persie Opens Up About Manchester United Departure, Says Louis van Gaal Forced Him Out.

But Scholes remains a big fan of the star midfielder and believes that he has more than he has shown in recent years. Scholes, who represented United in 500 games and won 25 titles with them, also felt that Pogba was similar to Gerrard and can perform upto the latter’s level. “I played a bit with Paul and everyone knows the talent he's got,' Scholes told United’s official podcast.

“He's been brilliant for Juventus, brilliant for France in the World Cup and really good at times here [at United ] as well,” Scholes added. “He can do everything as a midfield player and you'd probably liken him to Steven Gerrard with the pace, the power, the skill. He can do absolutely everything.” Pogba had recently spoken about the influence Scholes and Andre Pirlo had in his shaping as a midfielder. “You learn a lot and you look at them,” Pogba had said.

(The above story first appeared on LatestLY on Apr 22, 2020 03:22 PM IST. For more news and updates on politics, world, sports, entertainment and lifestyle, log on to our website latestly.com).