The French defender could become the fifth signing for Tottenham Hotspur this summer. Lenglet is reported to be happy to join Spurs with manager Antonio Conte keen on signing him. 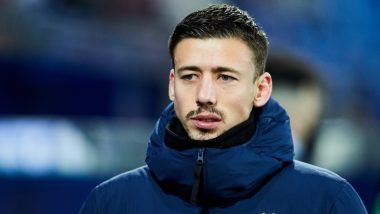 Tottenham Hotspur continue with their massive spending spree this summer as they are reportedly closing in on a move fo Clement Lenglet. The centre-back, according to Sport, would sign for the North London outfit on a loan deal for this season. Antonio Conte's men have already made some big moves this summer by signing the likes of Ivan Perisic, Fraser Forster, Yves Bissouma and Richarlison. If this transfer goes through, Lenglet would be their fifth signing of the window. Mohamed Salah Transfer News: Egyptian Star Signs Long-Term Contract With Liverpool

It is learnt that Lenglet's move to Spurs would be beneficial for both clubs. While Spurs would have the services of an experienced centre-back, Barcelona will be able to free their wage bill a bit. Also with this being a World Cup year, the defender would be keen on playing a good number of minutes on the pitch to make it to the national team, something he would find difficult in Barcelona. The Catalan giants are said to be signing Andreas Christensen with an interest in Jules Kounde.

Noted Italian football journalist Fabrizio Romano has claimed that the player has reached full agreement with Spurs and is happy to join the North London outfit. The final details of this loan deal are reportedly being resolved.

(The above story first appeared on LatestLY on Jul 02, 2022 07:04 PM IST. For more news and updates on politics, world, sports, entertainment and lifestyle, log on to our website latestly.com).