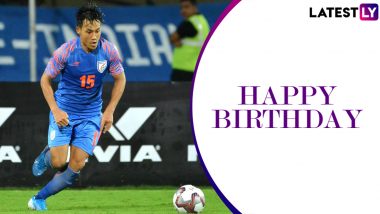 One of the future stars of Indian football, Udanta Singh celebrates his 24th birthday today (June 14, 2020). Since his emergence on the Indian football scene as a teenager in 2014, Udanta has continued to improve himself each passing year and is now one of the most potent attacking threats, for his club Bengaluru FC and for the national team as well. So on the winger’s birthday, we take look at some lesser-known facts about him.

Born in Manipur, Udanta Singh started his footballing journey at the prestigious Tata Football Academy. Blessed with raw pace and power, Udanta has the ability to break any defence with his trickery. From the famed TFA academy, Singh made the jump to Bengaluru FC and has been with them since. The winger has played for the national team at the youth level as well as for the senior team.

(The above story first appeared on LatestLY on Jun 14, 2020 10:00 AM IST. For more news and updates on politics, world, sports, entertainment and lifestyle, log on to our website latestly.com).