UEFA Euro 2020: Three Reasons Why Spain Have Struggled in the Tournament So Far

Spain used to be one of the world's best teams with high-profile players making an impact in almost every competition that they played. They walked into Euro 2020 as one of the favourites but two underwhelming matches has certainly raised a lot of questions. They now need to win against Slovakia to guarantee a last-16 spot. 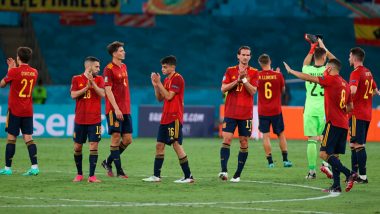 Spain players after the match against Poland (Photo credit: Twitter)

A decade ago, they were one of the world's strongest teams. Comprising of a fully star-studded lineup, the likes of which included Carles Puyol, Andres Iniesta, Xavi, Iker Casillas, Fernando Torres, David Villa, Cesc Fabregas amongst others, Spain were an indomitable force in world football. No wonder, they won two consecutive Euro titles in 2008 and 2012 and tasted their maiden World Cup success in 2010. They were a force to reckon with in every tournament that they played in back then. Cut to 2021. They had entered Euro 2020 as one of the title favourites. But now, qualifying for the last 16 from a group that looked pretty easy for them, has become really difficult. Two draws, one of them being goalless and the once-mighty La Roja are now left needing to win their last Group E match against Slovakia to ensure qualification into the knockout rounds. Euro 2020: Spain Struggling To Keep Up With Weight of Expectations, Says Alvaro Morata

So what went wrong for them? Yes, one can argue that this is a team in a rebuilding phase. But this Spain is certainly not the one football fans are used to watching. Here are three reasons why they have been struggling to make a mark in Euro 2020.

1) Lack of experience: Spain at this point of time, really lack experience in their squad. Apart from names like Jordi Alba, Koke and Sergio Busquets, most of the squad lacks big match experience and that is perhaps stinging Luis Enrique's side, coupled with the fact that Busquets, one of their midfield mainstays had to sit out of two matches after testing positive for COVID-19. It is definitely pleasing to see young talent being promoted at the greatest of platforms but there also has to be experience complemented alongside so as to form a strong force. Their lack of experience is especially visible upfront, considering the fact that they have attempted 29 shots in the two matches that they have played and have been able to score just one goal. They dominated Sweden in ther first match with more than 80% ball possession but failed to score a goal. Finishing has been a real issue with them now and it is high time that Enrique finds out a solution to this problem.

2) Absence of a leader: The presence of a leader in any team is important especially whenever it comes to boosting morale with a match-winning performance. Spain genuinely lack that. Let us look at some examples--Belgium has Kevin De Bruyne, Portugal has Cristiano Ronaldo and France have the likes of Paul Pogba, Karim Benzema and also Kylian Mbappe. Spain doesn't have any player in their current Euro 2020 squad who can win a match on his own. Under these circumstances, the absence of Sergio Ramos really raises a lot of eyebrows.  Was Enrique right in leaving out his most experienced player for a tournament as big in magnitude as the Euros? Well till now, that answer seems to be no and only time will give rise to more questions depending on Spain's run at Euro 2020.

3) No fear factor: Facing Spain in the early 2010s would indeed make their opponents think, plan and do a lot of homework but that has drastically changed right now. Now, they just have one victory in their last eight matches in major competitions. Yes, one can attribute this lack of fear factor to the absence of genuine matchwinners and serious competitors like Puyol or Xavi. No one's complaining about the lack of talent in this Spain squad. They indeed are a talented bunch but somehow, they certainly lack that element of striking fear in the minds of their opponents. Yes, this also has to do with their performances in major competitions. They crashed out of the last two World Cups and despite a decent showing in the 2018 Nations League, they are yet to form a side that makes a difference and has the potential to go all the way in a major tournament.

With a shocking exit from the Euro 2020 awaiting as a potential future, Spain must do all that they can to ensure three points against Slovakia on June 23. At least that would save them the blushes and give further opportunities for Enrique and his men to carry on with their rebuilding phase and expectedly come good, sooner or later.

(The above story first appeared on LatestLY on Jun 20, 2021 11:30 PM IST. For more news and updates on politics, world, sports, entertainment and lifestyle, log on to our website latestly.com).