UEFA Europa League 2020-21 Winner Predictions: Who Are the Favourites To Win UEL Trophy?

While Manchester United, an European heavyweight club are experienced enough at this stage, after having won this title with Jose Mourinho at the helm in 2017, Villarreal are relatively newcomers to this arena. But Unai Emery could prove to be a tough nut to crack, having won this title for three consecutive years with Sevilla. 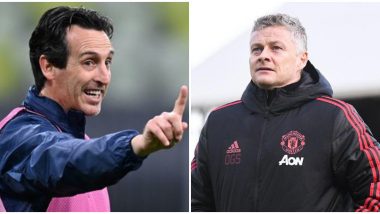 Manchester United vs Villarreal--the two sides taking on each other in the UEFA Europa League final in Grandsk on Wednesday is essentially a clash of contrasts. While Manchester United, an European heavyweight club are experienced enough at this stage, after having won this title with Jose Mourinho at the helm in 2017, Villarreal are relatively newcomers to this arena. Villarreal vs Manchester United, UEFA Europa League Final Live Streaming Online: Where To Watch UEL 2020–21 Final Match Live Telecast on TV & Free Football Score Updates in India?

In contrast, their manager Unai Emery isn't just experienced, but highly accomplished in this competition as well--winning this title for three consecutive years with Sevilla. And he would surely know have a plan up his sleeve to win this competition for a record fourth time. Solksjaer on the other hand would be hoping to get his hands on his first trophy since taking up the United job in 2019 and his inexperience at this stage can turn out to be one of the deciding factors of this clash.

Their trajectories to the final also was different. Villarreal clinched a hard-fought 2-1 win over Arsenal in the semis while United ran through AS Roma, defeating them 8-5 in order to book a final berth. Come Wednesday, it would indeed be a riveting encounter between both these sides. VIL vs MU Dream11 Prediction in UEL Final 2020–21: Tips To Pick Best Team for Villarreal vs Manchester United Football Match

Prediction: Manchester United winning the title. Even if Emery pops up with a plan to defeat United, it would boil down to player performances, something which United can swear by.

1) Better players: While writing this, I am, in no way undermining what Villarreal players are capable of. They have just reached an European final and greater things are in store for them if they can pull off a win. But United has a greater chance of victory owing to better players. By better players, I mean players who can win matches on their own. Bruno Fernandes, Paul Pogba, Marcus Rashford and also Edinson Cavani--all are players who are more than capable of turning a match on its head and winning it for their sides. Besides, they also have the experience of playing such crunch games like these, something most of Villarreal players would lack.

2) Blunt attack: Villarreal's attack looked largely blunt in the semis. Goals from Raul Albiol and Manu Trigueros had given them the 2-1 cushion against Arsenal in the first leg of the semi-final. But their forwards could barely find the net in the second leg which eventually ended goalless. Also, going by their recent performances of late wherein they ended seventh in the La Liga table with a loss to Real Madrid in the last game, it is difficult to pick them as favourities for this competition.

3) Ole's at the wheel: And might just be the time for Ole to start something special. He would always be remembered for his winning goal against Bayern Munich in the 1999 Champions League final. But he would surely be judged on the trophies he has earned so far as United manager. He has a topsy-turvy season with the Red Devils wherein they looked down and out in their first few Premier League matches. But they were able to pick up pace soon and end up with the second spot in the league table, a difficult and applaudable feat. Despite not having won anything for United so far, the Norwegian would need just this match to cement his legacy on the club as head coach and also create a new story at Manchester United.

Villarreal would hold an advantage though with United captain Harry Maguire sitting out of the match with an injury. They might capitalise on this but have to equally sharp in defence because of the presence of strikers like Mason Greenwood, Marcus Rashford and Edinson Cavani.

(The above story first appeared on LatestLY on May 26, 2021 03:31 PM IST. For more news and updates on politics, world, sports, entertainment and lifestyle, log on to our website latestly.com).