Unai Emery's defeated his former side Arsenal 2-1 with Villarreal in the semis while Manchester United romped to a 8-5 win across two legs vs Roma to reach the final. Emery had earlier won the competition for three consecutive years with Sevilla from 2014-2016. 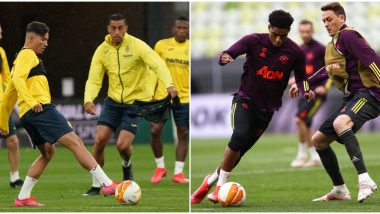 Ole Gunnar Solksjaer would be aiming at his first piece of silverware as Manchester United coach while the experience of Unai Emery would be key for Villarreal as these two sides take on each other in the final of the UEFA Europa League in Gdańsk, Poland on Thursday. Villarreal eliminated Emery's former side Arsenal 2-1 in the semi-final with the Spaniard getting a bit of revenge after being shown the door by the North London club in 2019. Paul Pogba Jokes Manchester United Manager Ole Gunnar Solskjaer Should Bench Him After Seeing a Statistic About Himself

United on the other thrashed Roma 8-5 across two legs to book a ticket to the summit clash that might just give Solksjaer a taste of his first trophy since being appointed Manchester United manager in 2019. The last time Emery had made the finals of this competition was with Arsenal in 2018 where they lost 1-4 to Chelsea.

The Red Devils' last trophy was the Europa League, which they had won in the 2017 season, coincidentally putting an end to the Emery dominance in the competition at that time, when the Spanish coach won three consecutive titles with Sevilla. After already having qualified for the Champions League, United would rather have a free approach without having to worry about European football next season. For Emery, a win would automatically ensure Champions League football next season but should they lose, the La Liga side, having finished seventh, would have to remain happy playing the UEFA Conference League next season.

VIL vs MU, UEL FINAL 2021 Dream11 Fantasy Team: Goalkeeper: David De Gea (MU) should be the goalkeeper for this match.

Bruno Fernandes should wear the captain's armband for this match while Dani Parejo should be named vice-captain of this MU vs VIL, Dream 11 Fantasy Team.

(The above story first appeared on LatestLY on May 26, 2021 11:48 AM IST. For more news and updates on politics, world, sports, entertainment and lifestyle, log on to our website latestly.com).