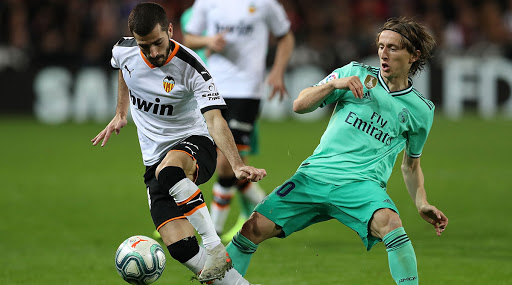 Real Madrid will take on Valencia in the first semi-final match of the Supercopa de Espana 2019-20 on January 8, 2020 (Wednesday). Both teams find themselves in new territory as this the first time that the Spanish Super Cup is played in Saudi and with a new four-team format. Looking at the head-to-head records, Real Madrid and Valencia have played 48 matches so far, with the former winning 26 times to the Los Che’s 10 victories and 12 matches have ended in a draw. In last five encounters, Real Madrid have two victories while Valencia have just one win while two matches were drawn. Zinedine Zidane Meets UD Almeria’s Owner Turki Al-Sheikh, Latter Recreates the Infamous ‘Materazzi’ Headbutt (Watch Video).

Valencia are the reigning Copa Del Rey champions and will look to get their hands on the first trophy of the season as they take on the record Spanish champions. Los Che have a lot of injury concerns as key forwards Rodrigo and Goncalo Guedes will be absent due to injuries. Along with them, Cristiano Piccini, Manu Vallejo and Lee Kang-in are definitely out for this clash. Real Madrid themselves have a load of injuries in their team as well. Eden Hazard, Karim Benzema and Marco Asensio are all set to miss this encounter. Ahead of this Super Cup clash, we take a look at the results of the last five encounters between the teams. Real Madrid Coach Zinedine Zidane Says, We Will Improve in 2020.

The two teams met earlier this season in the last match of 2019 where Real Madrid managed to get a last gasp equaliser to earn an equal share of points. Carlos Soler opened the scoring in the second half but Karim Benzema bought the visitors on level terms by netting in the 95th minute.

Real Madrid have always struggled to get the better of Valencia at the Mestalla and this match was no different. Madrid dominated the game but were not able to capitalize on it as Guedes and Garay put the home side 2-0 ahead. Karim Benzema pulled one back in injury time but it was not enough to avoid a defeat.

Valencia got off to the worst possible start imaginable as Daniel Wass’ own goal gave the home side an early lead. The visitors pushed hard for an equaliser in the match but were hit with a sucker punch in the final minutes of the game as Lucas Vasquez’s goal put the match to bed.

This was the final time that Cristiano Ronaldo played in this fixture and the Portuguese sure left his mark on the game. Ronaldo’s first-half brace put the visitors in a commanding position. Dani Parejo pulled one back for the hosts but late goals from Marcelo and Toni Kroos took the match away from the home side.

Both sides got off to a fast start as Marco Asensio and Carlos Soler scored in the opening 20 minutes of the game. Geoffery Kondogbia put the away side in front in the 77th minute but Marco Asensio’s late strike made sure that the match ended on level terms.