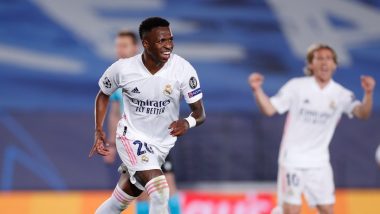 Vinicius Junior has been one of the trending names on social media after his brace against Liverpool in the first leg of the Champions League 2021. The first leg of the Champions League 20221 was held in the backyard of Real Madrid and it was the 20-year who scored a brace and led Real Madrid to a 3-1 win. With this, Vinicius Junior became the second-youngest scorer for Real Madrid in the UCL knock out matches. Jr is 20 years and 268 days old. Raul Gonzalez was the youngest as he was 18 years and 253 days old. Vinicius Junior’s Brace Leads Real Madrid to 3-1 Over Liverpool in UCL 2021.

Vinicius Junior scored a goal at the 27th and 65th minute of the match. Toni Kross had provided an assist for the first goal. This was Toni's 10th pass in the  Champions League and La Liga this season. This was the first time that Vinicius has scored a brace in the Champions League. Marco Asensio was also chipped in with a goal at the 36th minute. Mohamed Salah was the only one who scored a goal for Liverpool.

Toni Kroos’ lofted pass for Vinicius Jr’s first goal should be in a museum. 🖼

All credit to Vini Jr for the first touch and finish. Football heritage all round 🤩 pic.twitter.com/fUd2sW3M1K

Vinicius Jr was selected as the best player of the match and in a short video, he said that he was quite happy with the team's performance.

⚽️🌟🤳 @vinijr: Hello madridistas, I'm very happy to have been chosen as the best player of the match and happy for the team's performance! Thanks so much, we still have 90 minutes left. Hala Madrid!#HalaMadridpic.twitter.com/oN5Vso75jS

Zinedine Zidane was also pleased with the effort put in by the team. He lauded the players of Real Madrid in the post-match presser. The second led of the match will be held on April 15, 2021.

(The above story first appeared on LatestLY on Apr 07, 2021 10:50 AM IST. For more news and updates on politics, world, sports, entertainment and lifestyle, log on to our website latestly.com).