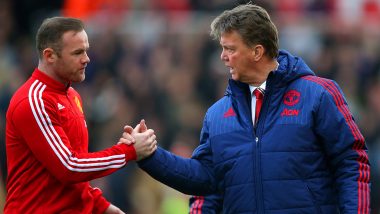 Louis Van Gaal was named as David Moyes’ replacement in order to bring glory days back to Manchester United. However, the Dutchman was sacked after two seasons at Old Trafford and was replaced by former Chelsea manager Jose Mourinho. In a recent interview, former Red Devil Wayne Rooney revealed that he was devastated with Van Gaal’s sacking in 2016 and believes that the team would have been much stronger if he had remained in charge.  Robin van Persie Opens Up About Manchester United Departure, Says Louis van Gaal Forced Him Out.

Van Gaal led Manchester United to FA Cup glory but it was not enough for the hierarchy as he was replaced after two years. Rooney is adamant that the Dutchman was sacked way too soon as he said that he learned more under him than any other coach. Manchester United Blocked Former Manager Jose Mourinho’s ‘Emergency Move’ to FC Porto in 2016, Says Portugal Club’s President.

‘I was devastated when Louis was sacked. For me, it was an absolute joy to work with him,’ Rooney is quoted by The Mirror in an extract from a new book, LVG – The Manager and the Total Person. ‘We should have kept him for a third season. We would have been so much stronger.’ The former United man added.

‘I felt things were improving and players started to understand his vision. In those two years,  I learned more than under any other manager. This is why I will be forever grateful to him. Not just for making me captain, but also for all the trust and belief he had in me.’ Rooney said further.

Wayne Rooney is currently at Derby County in the second division of English football where he is serving as a player-coach. Derby are currently 12th in the points table and are just five points off the playoff spots.

(The above story first appeared on LatestLY on May 17, 2020 04:16 PM IST. For more news and updates on politics, world, sports, entertainment and lifestyle, log on to our website latestly.com).