The Ukraine forward found it hard to control his emotions after scoring for West Ham during their Premier League match against Aston Villa, amidst his country's invasion by Russia. Since 26 February, I had to rest for four days because it was impossible to train, I was just thinking about my family and my people. I just tried to give everything on the pitch," he said after the game. 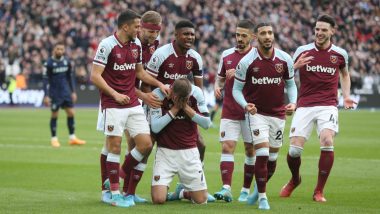 West Ham's Andriy Yarmolenko was left in tears after he scored his side's opening goal during their 2-1 win over Aston Villa. The Ukraine striker could not hold back his emotions after finding the back of the net, for the first time since Russia's attack on his country. And in a tribute to his nation, he scored, ran and knelt near the corner flag and after pointing fingers out to the heavens, he was seen covering his face while breaking down. His goal was followed by a strike from Pablo Fornals as West Ham kept alive their top-four finish hopes with a crucial victory. Fans Troll Cristiano Ronaldo For 'Referring' Himself As GOAT in Picture With Tom Brady

A moment which was bigger than football 💙💛 pic.twitter.com/VEPLtB4r67

Yarmolenko was consoled by teammates as he got emotional after scoring. He had missed out on West Ham's matches against  Liverpool and Wolves as he was on compassionate leave. After the match, Yarmolenko thanked his teammates and fans for their support, was quoted by Sky Sports saying, "It was so emotional for me because of the situation in my country. It is so difficult for me right now at this moment thinking about football because every day, the Russian army is killing Ukrainian people."

"It was so emotional. To be honest, I don’t know what to say. I just want to say thank you to my teammates, who support me all the time, every day. To West Ham fans, they also support me and Ukrainian people and also to all British people, because we feel you support us. Thank you, really. I felt the support from the fans and I tried to give everything on the pitch because I know how important the game was for us today. I’m not ready for 100% because the last two weeks I train maybe three or four times. Since 26 February, I had to rest for four days because it was impossible to train, I was just thinking about my family and my people. I just tried to give everything on the pitch," he added.

(The above story first appeared on LatestLY on Mar 14, 2022 11:56 AM IST. For more news and updates on politics, world, sports, entertainment and lifestyle, log on to our website latestly.com).