Xherdan Shaqiri was recently signed by Liverpool for an amount of 13.5 million Euros. Watch the amazing bicycle-kick goal video against Manchester United, here. 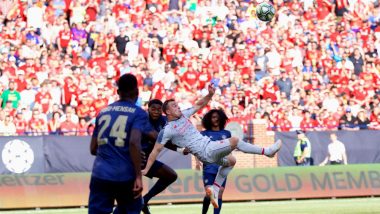 Very few players debut as spectacularly as Xherdan Shaqiri did, on Saturday, against Manchester United. Formerly a Stoke City player, Shaqiri made his debut for Liverpool FC in the International Champions Cup against Jose Mourinho’s side. Shaqiri scored a stupendous bicycle-kick, as the fifth goal in the night saw Manchester United sink to a 4-1 defeat.

The match ended in a one-sided affair as the Red Devils faced a rout against a resurgent Jurgen Klopp’s side. It was Sadio Mane, who converted a penalty shot, which gave Liverpool an early lead in the match. However, their happiness was short-lived as Andreas Periera scored an equalising-goal with a beautiful free-kick.

Proud to make my Debut like this for @LFC 🔥🔥😎👌🏽 Big thanks to the fans in 🇺🇸for the Warm welcome🔴🔴#XS23#YNWA pic.twitter.com/dglB7xGmk0

Daniel Sturridge, Sheyi Ojo, and Xherdan Shaqiri were the other goal-scorers in the night as Liverpool defeated Manchester United comprehensively. The Reds were leading 3-1 comfortably when Shaqiri scored the mind-boggling goal in the 82nd minute. The bicycle-kick was so perfectly executed that the goal-keeper couldn’t move an inch and remained a mere spectator.

Xherdan Shaqiri was recently signed by Liverpool for an amount of 13.5 million Euros. The 26-year-old footballer made his debut with FC Basel in the year 2009. Since then, Shaqiri has previously played for Bayern Munich and Inter Milan too. Shaqiri plays at a ‘winger’ position for his football club and country, Switzerland.

(The above story first appeared on LatestLY on Jul 30, 2018 03:39 PM IST. For more news and updates on politics, world, sports, entertainment and lifestyle, log on to our website latestly.com).