India a year full of highs and lows in football as the Blue Tigers continued to press on their claim of becoming an Asian giant with the SAFF Championship 2021 win despite performing poorly in the World Cup Qualifiers. 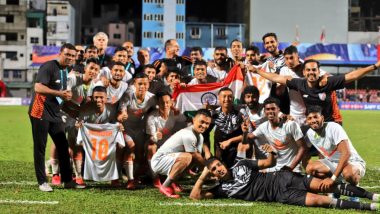 The year 2021 was a pretty topsy-turvy one for Indian football at large. It was a ride of mixed emotions. On some occasions, it seemed that the national team is heading nowhere following a string of poor shows and at other times, fans were reinstated with the belief that India indeed were the sleeping giants in the game. As the year comes to a close, we revisit some major developments in Indian football, encompassing events at both the international and club level. Indian Football Team Schedule in 2022: List of Tournaments, Match Fixtures to be Played by the Blue Tigers in the New Year.

Here's how Indian football fared in 2021:

World Cup Qualifiers: Disappointment is the word that every Indian fan can and would perhaps relate to it when it comes to World Cup Qualifiers. Igor Stimac's side was criticised for their style of play as the Blue Tigers suffered defeats from UAE and Qatar. India did draw some games winning only one against Bangladesh in June. Overall, it was pretty much curtains for India in the World Cup Qualifiers as they finished third in the group with seven points from eight games.

SAFF Championship India did pretty well to wipe out the disappointment of the poor show at the World Cup Qualifiers and they did fight pretty hard to win the SAFF Championship in October this year. The Blue Tigers did not start this tournament well, drawing their first two games but they turned up when the chips were down and played well to make it to the final where they defeated Nepal 3-0. Year Ender 2021: From Cristiano Ronaldo Moving to Manchester United to Lionel Messi Donning PSG Shirt, Check Out 5 Shocking Transfers this Year!

I-League: Gokulam Kerala FC won the 2020-21 I-League title for the first time in their history this year, marking their meteoric rise in Indian football. Bidyasagar Singh from TRAU FC was named Hero of the League as he ended as the highest scorer with 12 goals. Also, Mohammedan Sporting, one of Kolkata's and India's historic clubs, achieved promotion.

Indian Super League: Mumbai City had a memorable year in the Indian Super League 2020-21 season, winning the double (league shield as well title), beating ATK Mohun Bagan on both occasions. This season set them off as one of the heavyweights in India's club football under the tutelage of Sergio Lobera.

Asian club football: Gokulam Kerala FC women's team were also nominated by the All India Football Federation to join the AFC Club Championship 2020-21. The club crashed out from the group stage with a 3-1 win over Uzbek club FC Bunyodkor.

More trauma followed Indian clubs in Asian club football competition as ATK Mohun Bagan suffered a 0-6 thrashing at the hands of FC Nasaf in the Inter Zonal Semifinal of the AFC Cup. Bengaluru FC had crashed out from the group stage itself.

However, the silver lining in FC Goa's performance in the AFC Asian Champions League. Though they failed to win a game, but their performance was gritty and applauded by many. Young goalkeeper Dheeraj Singh was also named in the Team of the Tournament.

Sunil Chhetri was named Khel Ratna winner, becoming the first footballer to have achieved this feat.

If there's one thing that can be inferred in 2021 with respect to Indian football, it is that the team always shows up when their backs are stacked against a corner and there's no way to go but move up. We hope that the Blue Tigers attain greater heights in the next year.

(The above story first appeared on LatestLY on Dec 31, 2021 06:00 PM IST. For more news and updates on politics, world, sports, entertainment and lifestyle, log on to our website latestly.com).