The year 2021 has been quite eventful in terms of football. The year has witnessed unexpected transfers this season. Some of them have been quite hard to believe whereas the fans have been happy about a few others. Like for Lionel Messi, one could have not imagined him seeing Barcelona forward in any other shirt, 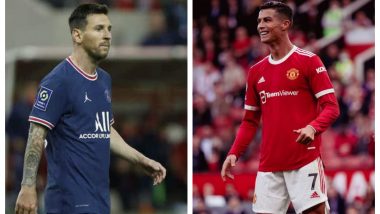 The year 2021 has been quite eventful in terms of football. The year has witnessed unexpected transfers this season. Some of them have been quite hard to believe whereas the fans have been happy about a few others. Like for Lionel Messi, one could have not imagined him seeing Barcelona forward in any other shirt, but the year 2021 made us watch his entire journey to Paris. Now that the year is coming to an end, let's have a look at the top five transfers in this season so far. Year Ender 2021: From European Super League To Denmark Playing After Christian Eriksen's Collapse, Biggest Controversies That Rocked Football World.

Cristiano Ronaldo played for Juventus for the last two seasons and even did wonders by scripting prolific records and creating new ones. But, Bianconeri did not win the Serie A 2020-21 title and it was said that Ronaldo will leave Juventus. The Directors, Board Members refuted the rumours but that surely didn't happen. Earlier it was reported that Ronaldo will be making a move to Manchester City but the Red Devils welcomed their hero home. Cristiano Ronaldo Transfer News: Manchester United To Pay Portuguese Star's Fee In Installments.

Now, this was quite an unexpected move. But it was the La Liga financial fair play rules that ushered Barcelona to discontinue their contract with Messi. What followed later was the tearful press conference by Lionel Messi at Barcelona and the fans too were quite annoyed with the development. Lionel Messi Joins PSG: Club President Nasser Al Khelaifi Says They Always Follow Financial Fair Play Rules After Argentine Joins French Side.

Yikes! who could have thought that Sergio Ramos could have left Real Madrid and this player would go on to share the dressing room with Lionel Messi? We all know about the rivalry that Barcelona and Real Madrid shared. Given this fact, one could have not imagined the two sharing the same locker room. But that's how life panned out for Ramos and he signed up with the French outfit. A few later Messi joined him! Sergio Ramos Transfer News Update: PSG Offer Three-Year Deal to Real Madrid Captain.

Romelu Lukaku was another shocking transfer this year. The former Manchester United player plied his trade for Inter Milan last season and switched to Chelsea as the Blues shell out €115m.

Here was yet another shocking transfer this season. The fans were still in two minds of Grealish would quite Aston Villa. But then Man City shelled out a whopping pay cheque of €117.5m and soon he was donning the Man City jersey.

That's all we have on this list, if you think we have missed out on any more interesting transfers, do feel free to leave your comments below. We wish all our readers a Happy New Year.

(The above story first appeared on LatestLY on Dec 26, 2021 07:17 PM IST. For more news and updates on politics, world, sports, entertainment and lifestyle, log on to our website latestly.com).