Indian Football Team Schedule in 2022: List of Tournaments, Match Fixtures to be Played by the Blue Tigers in the New Year

As of now, it seems that the only major competition that India would take part in 2022 would be the final of AFC Asian Cup 2023 Qualifiers. The year is expected to be a busy one in international football with the World Cup being held in Qatar. 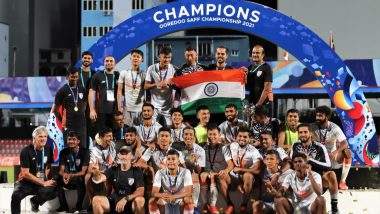 The Blue Tigers, following a mixed 2021, would be aiming to do well and build a strong reputation in Asian football in 2022. Winning the South Asian Football Federation (SAFF) Championship as the year drew its end did soothe a few nerves and bring excitement to Indian football fans after their dismal show in the World Cup Qualifiers where they finished third on the points table. There were a lot of harsh criticisms that followed the Indian team after their disappointing show in the FIFA World Cup Qualifiers but Igor Stimac's side fought back to win the SAFF 2021 title and football fans would expect the Blue Tigers to maintain that form going into 2022. Year Ender 2021: From Cristiano Ronaldo Moving to Manchester United to Lionel Messi Donning PSG Shirt, Check Out 5 Shocking Transfers this Year!

Captain Sunil Chhetri, amidst the team's performances, stood out to be one of the best in what he does. He surpassed Lionel Messi's tally of international goals among active footballers and also was awarded the Khel Ratna award, the first footballer to receive this honour. Although age is not in his side, the talismanic forward would aim to continue his good form in international football and aim to fetch India more laurels.

Apart from this, there is no update as of now on the matches or competitions to be played by the Indian national team in 2022. The Indian team might play exhibition and friendlies although there is no official word on it yet.

India would be having quite a busy domestic schedule though with competitions like the ISL, I-League and also the Durand Cup, which often acts as a pre-season tournament.

I-League: The I-League probably would kick off in late December-early January after the completion of the World Cup.

Durand Cup: Despite the World Cup, the schedule of Durand Cup 2022 is likely to remain unchanged as the tournament is likely to be played sometime between May-August.

It has to be noted that the schedule for the above competitions are yet to be announced and the dates are not finalised yet.

(The above story first appeared on LatestLY on Dec 31, 2021 02:23 PM IST. For more news and updates on politics, world, sports, entertainment and lifestyle, log on to our website latestly.com).