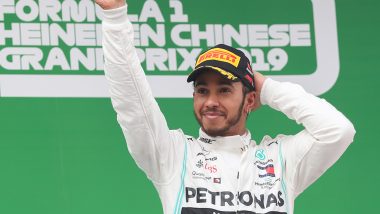 Barcelona, August 14: Mercedes secured a second one-two finish at the second Free Practice session for the Spanish Grand Prix at the Circuit de Barcelona-Catalunya with Lewis Hamilton leading the pack ahead of team mate Valtteri Bottas by 0.287s.

Hamilton's best time in FP2 was 1:16.883 with track temperatures around 10 degrees higher than the existing conditions during FP1. His time is 0.098s slower than Bottas' session-leading time from earlier in the day.

Red Bull's Max Verstappen was third, as he was earlier in the day, 0.821s adrift of Hamilton. Daniel Ricciardo came next, having managed to go around the circuit in his Renault 0.164s off Verstappen while Romain Grosjean managed to get Haas a top five finish. Grand Prix 2020: Formula 1, FIA Confirm No New COVID-19 Case at Silverstone Circuit.

Ferrari's Charles LeClerc finished P6 while his team mate Sebastian Vettel's struggles continued. The four-time champion managed to finish only P12 although the pair were separated by a gap of just 0.257s. It was certainly a smaller gap than the one from Verstappen to Alex Albon in P13, which stood at 0.787s after the quali simulations, Albon having made a mistake out of Turn 5 on his fastest lap.

Behind Leclerc in sixth, Carlos Sainz was P7 for McLaren in his new MCL35 chassis - Vettel also running his own new SF1000 chassis, after a crack was discovered on his old one - while Sergio Perez was eighth on his first day back at the wheel of his Racing Point RP20 since contracting Covid-19. British Grand Prix 2020: Lewis Hamilton Wins Record Seventh Race in Silverstone, Red Bull's Max Verstappen Finishes Second.

Rounding out the top 10 came the second Renault of Esteban Ocon, who complained about a lack of rear stability on his R.S.20 before finishing ninth, while 10th was Pierre Gasly for AlphaTauri, 0.045s ahead of the second Racing Point of Lance Stroll in P11.

(The above story first appeared on LatestLY on Aug 14, 2020 11:10 PM IST. For more news and updates on politics, world, sports, entertainment and lifestyle, log on to our website latestly.com).