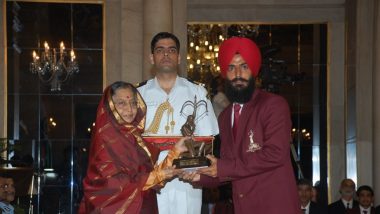 Born on August 8, 1983, Rajpal Singh was the former Indian hockey captain and played at the frontline position. He became captain of the Indian National Hockey Team replacing Sandeep Singh right before the FIH World Cup 2010 held in New Delhi. Sadly, India finished eighth in the tournament. However, in the following year, under his captaincy, the side defeated arch-rivals Pakistan in 2011 Asian Men's Hockey Champions Trophy. As the former Indian captain turns 37, let’s have a look at five quick facts about Rajpal Singh.

He was one of the members who had led fought with the management of the administrators of Hockey India. That's all we have in this article if you feel that we have missed out on any good point, weigh in with your comments below. The entire team of LatestLY, wishes his a very happy birthday.

(The above story first appeared on LatestLY on Aug 08, 2020 08:05 AM IST. For more news and updates on politics, world, sports, entertainment and lifestyle, log on to our website latestly.com).