India returned from London 2012 with one medal, a silver by high jumper Girisha Nagarajegowda. 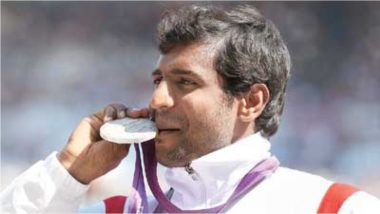 India sent ten Paralympians to London 2012. Of them, Girisha Nagarajegowda (also written as Girish N Gowda) used the scissors technique to achieve a personal best of 1.74m to win a silver medal in the Men’s F42 High Jump. Born with a disability in the left leg, Girisha announced himself by winning the national high jump championship. In 2006, he won bronze at a Junior sports meet in Ireland, and gold at Kuwait and Malaysia. He was honoured with the Padma Shri in 2013, a year after he won the silver at the Paralympics. India at the Paralympic Games Part 3, 2004 Athens: Devendra Jhajharia Second Indian to Win Gold Medal at Paralympics.

That remained India’s only medal of the edition: they finished 67th. Of the other para-athletes, the best performance came from Farman Basha, who had finished fourth in Beijing 2008. He came fifth.

But India could probably have done much better, had the logistics been under control. The mission was marred by a bizarre controversy. Six coaches and five escorts were supposed to accompany the ten para-athletes. As things turned out, only two of the five escorts were assigned passes for the Olympics Village.India at the Paralympic Games Part 4, 2008 Beijing: No Medal for Indians.

This caused a furore, as some Paralympians needed a wheelchair, but there was no escort to guide them even to basic amenities.

(The above story first appeared on LatestLY on Aug 23, 2021 11:35 PM IST. For more news and updates on politics, world, sports, entertainment and lifestyle, log on to our website latestly.com).