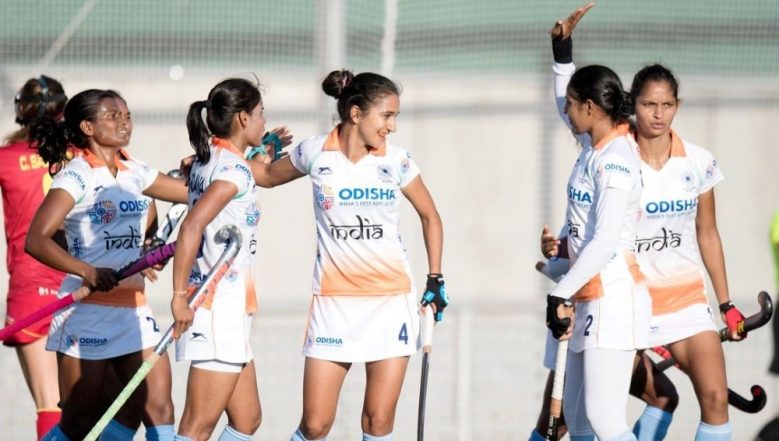 Murcia (Spain), Jan 31: The Indian women's hockey team squandered a two-goal advantage at the half-time to allow hosts Spain stage a superb fightback and earn a 2-2 draw in the fourth and final encounter here Thursday.

Deep Grace Ekka (8th) and Navneet Kaur (26th) scored for India, while Lucia Jimenez (35th) and Clara Ycart (39th) sounded the board for the hosts.

With this draw, the two teams levelled the four-match series 1-1.

Spain had registered a narrow 3-2 win in the opening match with the second match ending in a 2-2 draw. India won the third match 5-2. India will now face 2018 World Cup silver medallists Ireland on February 2. India got off to a rollicking start as they caught the Spanish defense on the wrong foot. An infringement by a Spanish defender saw India being awarded a penalty stroke only minutes into the first quarter.

Though India missed scoring from this opportunity, Deep Grace Ekka made up for the missed chance with a well-converted penalty corner awarded in the 8th minute. India's 1-0 lead doubled in the second quarter when their forward line worked in tandem to penetrate into the striking circle with striker Navneet Kaur scoring a beautiful field goal off Rani's assist in the 26th minute.

At the second hooter, India had registered a comfortable 2-0 lead.

After the 10-minute halftime break, hosts Spain made a resolute comeback as they vied to overcome the initial setback. The Indian defence was put to the test when Lucia Jimenez scored a field goal in the 35th minute. Pressure to defend their 2-1 lead saw India give away a penalty corner in the 39th minute. Clara Ycart was impeccable in her attempt to score as Spain levelled the score to 2-2. The final quarter saw India up their ante in attack but a strong Spanish defence denied any opportunities inside the circle resulting in a draw.