Real Madrid are assured of signing Kylian Mbappe in the upcoming transfer window as the Frenchman has guaranteed that he will be joining the Spanish giants as a free agent once his current deal with Paris Saint Germain expires. 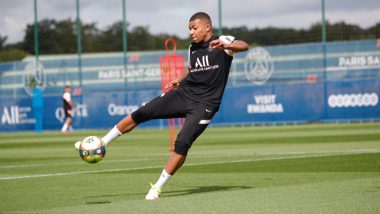 Kylian Mbappe has been the primary target for Spanish giants Real Madrid since 2017 and it looks like the Los Blancos might get their man in the summer. The Frenchman joined the Paris Saint Germain on a permanent basis in 2018 and since has been one of the best players in the world but with his contract expiring, the 22-year-old is looking for a change in scenery. Karim Benzema Transfer News: Manchester City To Make a Move For Real Madrid Superstar.

According to a report from AS, Real Madrid are assured of signing Kylian Mbappe in the upcoming transfer window as the Frenchman has guaranteed that he will be joining the Spanish giants as a free agent once his current deal with Paris Saint Germain expires.

Realm Madrid have been relentless in their pursuit of the 22-year-old but PSG have been adamant about holding on to their star striker. Los Blancos made a huge offer for Kylian Mbappe in the summer but it was turned down by the Parisian outfit as they consider the forward to be an important member in their bid to win a maiden Champions League title.

However, it looks like the Parisians will be unable to keep hold of their star man as his current contract comes to an end in the summer following which he will be a free agent. Following this, Mbappe is expected to complete his move to Real Madrid, a club which he wants to join and has reportedly verbally agreed with the Los Blancos over the transfer.

Real Madrid manager Carlo Ancelotti has also asked for the signing of the Frenchman as he hopes to line up with an attacking trident of Kylian Mbappe-Karim Benzema- Vinicius Jr from next season onwards, giving Los Blancos a better chance of competing for European glory.

(The above story first appeared on LatestLY on Dec 03, 2021 05:33 PM IST. For more news and updates on politics, world, sports, entertainment and lifestyle, log on to our website latestly.com).