Mann Kaur Dies: The Centenarian Sprinter, Who Started Her Athletic Career at the Age of 93, Dies at 105 Due to Cancer

Centenarian sprinter Mann Kaur, who started her athletic career at the age of 93 and set a record by becoming the world's fastest centenarian at the American Masters Games in 2016, died at a private hospital near Chandigarh on Saturday. 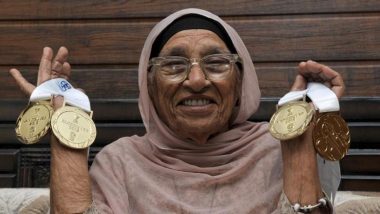 Chandigarh, July 31: Centenarian sprinter Mann Kaur, who started her athletic career at the age of 93 and set a record by becoming the world's fastest centenarian at the American Masters Games in 2016, died at a private hospital near Chandigarh on Saturday. She was 105 years old and was suffering from cancer. Kaur, known as the 'Miracle Mom' from Chandigarh, will be cremated here on Sunday at 11 a.m., said her son Gurdev Singh, also a veteran athlete.

Recipient of Nari Shakti Puraskar 2019, she used to say age was no bar to realise one's dreams. In the last 10 years, she literally ran away with accolades across the globe -- bagging more than 20 medals in track and field events. She believed participating in competitions gave her a lot of happiness that went for her countless admirers, too, who watched her run. Nari Shakti Puraskar 2020: From Mann Kaur to Arfa Jan And Bina Devi, Full List of Females Who Received The Honour on International Women's Day.

An inspiration for many, Mann Kaur Ji defied age & took to athletics at age 93, winning multiple medals in the Masters Athletics Championship.

She was a special invitee at the Fit India Movement launched by Hon'ble PM. I convey my deep condolences to her family. pic.twitter.com/pS2oRIzOdK

She was also associated with the 'Fit India' movement. Donning a blue blazer with an official insignia over her Punjabi suit and an off-white headscarf, short-statured Kaur marched up to the President when her name was called for receiving the award on Women's Day in 2020. After receiving the award with folded hands, she ambled off the dais while swinging her arms.

Hailing from Patiala in Punjab, the sprinter was accompanied by her 81-year-old son Gurdev Singh to the award ceremony. Born on March 1, 1916, she won her first medal in 2007 at the Chandigarh Masters Athletics meet in which she participated just as a formality after seeing her eldest son Gurdev taking part in a race in Patiala. From then onwards, she only added to her list of achievements.

She was the oldest person to walk to the top of Auckland's Sky Tower in 2017. Despite suffering from osteoporosis, she had displayed how determination was a key to success. "Her spirit of participating in World Masters Athletics Championship will continue to run with the participation of her son (me)," Gurdev Singh told the media. He said his mother battled the disease, too, with a fighting spirit.

(The above story first appeared on LatestLY on Jul 31, 2021 10:47 PM IST. For more news and updates on politics, world, sports, entertainment and lifestyle, log on to our website latestly.com).