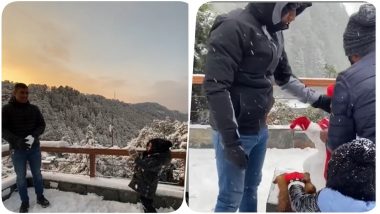 MS Dhoni shared a four-minute-long video on his official page of his social media account. The former Indian captain was seen making a snowman with daughter Ziva. The two were pelting snowballs at each other in the balcony of the house as Sakshi shot the video. Later in the clip, MS Dhoni was seen strolling on the streets of Dehradun. Check out the video below:

Waking up to flurries descending .........experiencing first snowfall of 2020 in “Queen of the hills” an amazing experience #rockvilla

As per the recent revelation made by team India Head Coach Ravi Shashtri, the former Indian captain could hang up his boots from ODI cricket really soon. However, he might be seen in Indian colours if he has a crackling season in the IPL 2020. "He has finished his Test career, he may soon end his ODI career. So he will be left with T20, he will definitely play the IPL. We will have to consider a person’s experience and form. They will bat in the number 5-6 position. If Dhoni plays well in IPL then he does put himself in contention," said Ravi Shastri during an interview.

(The above story first appeared on LatestLY on Jan 09, 2020 07:56 PM IST. For more news and updates on politics, world, sports, entertainment and lifestyle, log on to our website latestly.com).