Neeraj Chopra, won brought glory to India by winning a memorable gold medal in men's javelin throw at the Tokyo Olympics 2020, turns 24 today. And on his birthday, let us revisit some of the major achievements of his career so far. 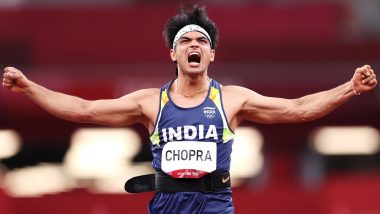 Neeraj Chopra celebrates after his throw at the Tokyo Olympics 2020 (Photo credit: Twitter)

The year 2021 has and would always go down as a special one for Neeraj Chopra. And why not? The athlete cemented his legacy and etched his name in Indian sport by winning the nation's first-ever Olympic gold medal in track and field athletics in the post-Independence era. And he did it in style. Participating in the men's javelin throw event at the Tokyo Olympics 2020, Chopra registered a distance of 87.58m, which was good enough for him and India to celebrate a historic Olympic gold medal in athletics. Happy Birthday Neeraj Chopra: Netizens Wish Tokyo Olympics 2020 Gold Medallist on His Special Day (Check Posts)

Neeraj Chopra or 'the man with the golden arm' as many might prefer calling him, turns 24 today. Apart from his performance in Tokyo, he has had an illustrious career so far and on this special occasion, let us take a look at some of his major achievements:

1) A flying start: Neeraj Chopra got off the blocks pretty strongly when he made an impact in the South Asian Games in 2016. He registered a throw of 84.23 m, which equalled the then Indian record. He won a gold medal in this competition. For the record, Chopra's first international medal was a silver, which he won

2) Setting records: At just 18 years of age, Neeraj Chopra pulled off a record-breaking performance at the IAAF World U20 Championship. The track and field athlete registered a throw of 86.48m, breaking the world record in Men's U20 javelin throw. Interestingly, he is yet to be eclipsed and he still holds the record.

3) Gold medal on CWG debut: Neeraj Chopra continued to rise up the ranks as one of India's most talented and promising track and field athletes as he bagged another gold, this time on his debut at the Commonwealth Games in 2018. He registered a throw of 86.47m, which helped him bag the top prize. With this, he also became the first Indian to win gold in the javelin throw event at the Commonwealth Games. A year ago, he had won gold in the 2017 Asian Athletics Championships.

4) Asian Games glory: A throw of 88.06m at the Asian Games in 2018 ensured that he broke his own record. He won the gold medal here as well, which was India's first in javelin throw in the competition.

5) History in Tokyo: Adding to his already impressive resume, Neeraj Chopra once again proved to the world why he was one to watch out for as he pierced his way to a majestic gold medal with a throw of 87.58m, India's first-ever in track and field athletics at the Olympics, and second after Abhinav Bindra's shooting gold in 2008. This was the moment when not just India but the world stood and watched in awe of the young and smiling athlete entering the record books in grand fashion.

Neeraj Chopra has plenty more achievements as well, apart from these. Interestingly, he has shared a very healthy rivalry with Pakistan javelin throw Arshad Nadeem, who deems Chopra to be his inspiration. Neeraj Chopra also holds the rank of 'Naib Subedar' in the Indian Army. He was awarded the Arjuna Award in 2018 after his exploits in the Commonwealth Games that year. In 2020, he was also given the Vishisht Seva Medal by the President of India.  Post his Olympic glory, Neeraj Chopra has starred in TV advertisements and made it to top magazine covers as well!

From Latestly, we wish Neeraj Chopra a very happy birthday!

(The above story first appeared on LatestLY on Dec 24, 2021 10:43 AM IST. For more news and updates on politics, world, sports, entertainment and lifestyle, log on to our website latestly.com).