Cristiano Ronaldo is More Than a Footballer, He's a Multi-national Business

Ronaldo's great rival Lionel Messi moved to second, on $111 million, after signing a new contract at Barcelona that increased his salary from an estimated $50 million a year to a reported $86 million. 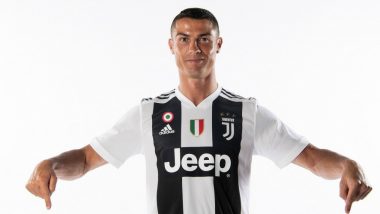 Paris, October 6: With huge revenues, a colossal audience on social media, sponsors queuing up, and his brand on products from hotels to underwear, Cristiano Ronaldo has long been more than just a football player. But CR7's global brand may be tarnished by an accusation of rape in the United States, a complaint that dates back to 2009. Ronaldo, "is truly a business offering a product, a service and a digital arm," Jean-Philippe Danglade, author of "Marketing and Celebrities", told AFP, pointing out that, in the player's native Madeira there is a Ronaldo museum and airport named after him. "In terms of the collective imagination, it's really impressive." Forbes magazine estimated that Ronaldo made $108 million (93.7 million euros) in 2017: $61 million in salary and $47 million from endorsements. While that's a jump in $15 million from the previous year, Ronaldo still dropped from first place to third. Who Is Kathryn Mayorga? Know More About the Rape Accuser Whose Video and Pics With Cristiano Ronaldo Are Going Viral.

Ronaldo's great rival Lionel Messi moved to second, on $111 million, after signing a new contract at Barcelona that increased his salary from an estimated $50 million a year to a reported $86 million. Boxer Floyd Mayweather soared into first place with $275 million, almost all of which came from a single bout against mixed martial arts fighter Conor McGregor. At 33, Ronaldo reportedly accepted a slight wage cut in the summer when he moved from Real Madrid to Juventus, signing a contract worth a reported 30-31 million euros a year after tax.

Forbes calculated that this represents a drop in gross salary from the $66 million he would have earned, with bonuses, at Real, to $64 million at Juventus, where his contract reportedly includes no incentives and is entirely guaranteed. Tax is another sensitive topic for Ronaldo, who agreed in June to pay 16.7 million euros in a legal settlement after he was caught neglecting to pay some Spanish taxes.

- Beckham and Jordan - Ronaldo outstrips Messi in sponsorhip, but the accusations against him have already made his main client anxious. His strongest links are with Nike, where he is in a "long-term-partnership." He has made his name a logo -- 'CR7' -- following the "jumpman" concept created by Nike in the late 1980S with another long-term partner Michael Jordan. Who Is Georgina Rodriguez? Cristiano Ronaldo’s Wife or Girlfriend? See Pics of Spanish Beauty Who Is Backing Juventus Footballer Amidst Rape Allegations!

It is a template that has also worked for former Nike client Roger Federer, who is the top sponsorship earner on the Forbes list, and David Beckham.

Since the opening of his first underwear shop "CR7" in 2006 on Madeira, the man with perfect abs, who models his briefs in ads, has expanded the range with jeans, shoes and accessories.

At the end of 2015, he joined the hotel group Pestana to build five hotels (a sixth is planned in Paris) under the name "CR7". On arriving in Turin this summer, Ronaldo launched a new "CR7 Underwear" line with Italian garment company Yamamay. "Because I'm rich, I'm beautiful, I'm a great player, people are jealous of me," Ronaldo said in 2011.

For the sponsors, the five-time Ballon d'Or and top scorer in Champions League history, with 120 goals (and counting), is an attractive brand. His 330 million total social media followers, more than any other sportsman, also helps draw sponsors. Among his blue-chip backers have included French telecommunications company SFR, Swiss watchmaker Tag Heuer, game makers Konami and EA Sports, oil manufacturer Castrol and Emirates airline. "His portfolio is very well-balanced with a dozen sectors and very different and complementary activities," said Danglade. But Ronaldo makes at least 20 million euros a year, and, perhaps much more, from his deal with Nike, which began in 2003.

CR7 has said this partnership "is for life". "I am a member of this family," said the Portuguese in a Nike video. "It's the best deal I've had in my career." Nike seems suddenly less in love. "We are deeply concerned by the disturbing allegations and will continue to closely monitor the situation," a Nike spokesman told AFP. Ronaldo is busy on social media and assiduous in promoting his main sponsor. Forbes counted 580 tweets in 2016 with a sponsor mention or logo, although as Forbes also pointed out, most photos of CR7 playing for Real Madrid also contained the logo of the club sponsor, Adidas. While Cristiano Ronaldo Tweets About His Innocence, Video of Footballer and Rape Accuser Model Kathryn Mayorga Dancing Intimately Goes Viral!.

Forbes calculates that the Ronaldo is way ahead of and the more reticent Messi, who is with Nike's eternal rival Adidas, in generating money for sponsors from social networks, saying that in 2016 Ronaldo was worth $500 million to Nike on social media and Messi $53.3 million for Adidas.