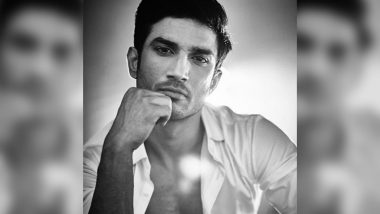 Bollywood actor Sushant Singh Rajput has reportedly committed suicide at his residence in Mumbai. The actor was living alone in his apartment during the lockdown and was reportedly not feeling well for the last couple of days. Many from the sports fraternity, including Virender Sehwag and Saina Nehwal, reacted to the report and condoled the sudden demise of a truly talented actor. Many praised the 34-year-old for his role in the MS Dhoni biopic and also expressed their shock and grief in hearing the sudden death. Sushant Singh Rajput Commits Suicide, Actor Found Hanging in His Apartment.

Reacting to the news of the actor’s sudden death, Sehwag reminded everyone that ‘life is fragile’ and we never actually know ‘what one is going through.’ Saina Nehwal, on the other, condoled the death of such a talented actor and said it was even "more sad to loose such a young talented actor and a human. You will be missed on screen dhoni.”

Life is fragile and we don’t know what one is going through. Be kind. #SushantSinghRajput Om Shanti pic.twitter.com/zJZGV96mmb

You Will Be Missed On-Screen Dhoni: Saina Nehwal

Gone way too soon. Its shocking and even more sad to loose such a young talented actor and a human. You will be missed on screen dhoni.#SushantSinghRajput 😢 pic.twitter.com/WCMJUytakW

Shocked and sad to hear about the loss of Sushant Singh Rajput.

Such a young and talented actor. My condolences to his family and friends. May his soul RIP. 🙏 pic.twitter.com/B5zzfE71u9

Harbhajan Singh also reacted and prayed that the news of Sushant Singh’s death was fake while Aakash Chopra reminded everyone why the year 2020 only keeps on getting worse. Meanwhile, Irfan Pathan recalled meeting the late actor at the Taj Hotel Gym.

Shocked Harbhajan Singh Prays for This to be Fake News

Plz tell me this is a fake news.. Cant believe Sushant Rajput is no more..Condolence to the family🙏🙏 Very sad #ripsushantsinghrajput pic.twitter.com/wjCK77aq3t

Oh My God....Sushant Singh Rajput is no more. Shocking. This year keeps getting worse... Om Shanti 🙏

Very very sad to hear about this. RIP #sushantsinghrajput

Pathan said that praised the actor for his work in Kedarnath and that Sushant had also asked him to please watch Chhichhore.

I chatted with him last at the Taj Hotel Gym, I praised him for his work in Kedarnath & his reply was ‘Bhai please do watch chhichhore’ you will love it!

I must admit to being shaken. #SushantSinghRajput

Shell shocked.... hearing this news of the death of a successful actor #Sushantsinghrajput played an inspiring role of the great #MSdhoni so well... #RIPsushant

Rajput was found hanging in his apartment although reports are yet to be confirmed. Sushant started his career with the television show Kis Desh Mein Hai Mera Dil and achieved fame with Pavitra Rishta. His on-screen chemistry with ex-girlfriend Ankita Lokhnade was appreciated and also earned a place in Bollywood. He made his film debut with ‘Kai Po Che!’ in 2012 and was part of several hit films like PK and Kedarnath.

His biggest blockbuster was, however, MS Dhoni: The Untold Story, which was biopic of the former Indian captain by the same name. Sushant’s last release was ‘Chhichhore’ in 2019 in which he paired with Shraddha Kapoor. The 34-year-old was also preparing for his next movie ‘Dil Bechara’ slated to release late in 2020.

(The above story first appeared on LatestLY on Jun 14, 2020 03:13 PM IST. For more news and updates on politics, world, sports, entertainment and lifestyle, log on to our website latestly.com).