Davis has now equalled her best previous performance at Wimbledon in reaching the third round where she will play Spanish 30th seed Carla Suarez Navarro for a place in the last 16. 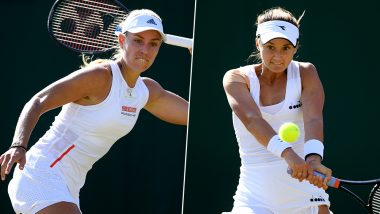 London, July 4: Angelique Kerber's defence of her Wimbledon title came to an early end after being knocked out in the second round by lucky loser Lauren Davis 2-6, 6-2, 6-1 on Thursday. The 31-year-old German, who came into the tournament in form having reached the final at Eastbourne, made her earliest exit since losing in the same round in 2013.

Davis has now equalled her best previous performance at Wimbledon in reaching the third round where she will play Spanish 30th seed Carla Suarez Navarro for a place in the last 16. "This means everything as it is what I work for," said Davis. "I was a bit nervous and I slid and hurt my foot in the first set.

"I am so happy to win, it is almost surreal."

Davis, who had strapping on her leg and shoulder, had been ranked outside the top 250 earlier this year but has risen back into the top 100. "Yeah it's been a tough journey and a process of learning and growing as a player and person," she said. "The drop in ranking has made this win even more fulfilling."  Wimbledon 2019 Live Streaming & Match Time in IST: How to Watch Free Live Telecast of Tennis Grand Slam on Star Sports TV Channel and Hotstar Online in India.

Davis said of course doubts had set in but deep down she always had belief she could succeed. "I believe in my ability," she said. "For me in the match the turning point was when I was 3-2 up in the second set and I said to myself you belong here, you can do this."

(The above story first appeared on LatestLY on Jul 04, 2019 10:55 PM IST. For more news and updates on politics, world, sports, entertainment and lifestyle, log on to our website latestly.com).