Spanish stalwart Rafael Nadal maintained his perfect set record this fortnight with a 6-3, 6-2, 6-4 win over Botic van de Zandschulp of the Netherlands, as the winner of a record 21 majors sailed into the fourth round of the French Open here. 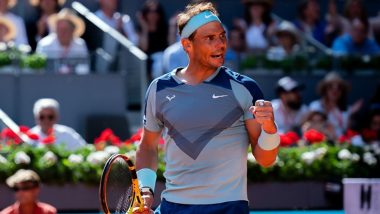 Paris, May 28 : Spanish stalwart Rafael Nadal maintained his perfect set record this fortnight with a 6-3, 6-2, 6-4 win over Botic van de Zandschulp of the Netherlands, as the winner of a record 21 majors sailed into the fourth round of the French Open here. Nadal, the winner of 13 Roland Garros title, dropped serve in the opening game of the match, but settled in on Lenglen and quickly found top gear. He broke back immediately and held to love in his next five service games, winning 23 straight points on serve as he took the contest out of a potentially tricky third-round contest. French Open 2022: Novak Djokovic Beats Aljaz Bedene, Cruises Into Fourth Round in Paris.

"(It) Has been a very good test and very positive test, because I was able to play my best match of the tournament so far, without any doubt," Nadal was quoted as saying by atptour.com on Friday. "For two sets and a half I was playing at a very positive level." The Spaniard was unplayable from the baseline as he dictated the terms. Van de Zandschulp, seeded for the first time at a Grand Slam at No. 26, had claimed an upset win against Casper Ruud of Norway to reach the Munich final last month but never threatened to knock out Nadal in Paris. He is the first Dutchman to reach the French Open third round since Thiemo de Bakker 2010.

Nadal has dropped just 20 games in nine sets to reach the fourth round, keeping alive the possibility of a fifth Roland Garros title without the loss of a set (2008, 2010, 2017, 2020). Nadal will face Canada's Felix Auger-Aliassime, who beat Serbia's Filip Krajinovic 7-6(3), 7-6(2), 7-5. Auger-Aliassime is coached by Nadal's uncle, Toni Nadal, according to atptour.com. It will be the second ATP head-to-head meeting between the two. Nadal had claimed a 6-3, 6-3 win in their previous meeting in Madrid in 2019. French Open 2022: Jo-Wilfried Tsonga Bids Tearful Farewell to Tennis After First Round Defeat.

"I already talked with Toni after my match," Nadal said. "For me it's very simple. He's my uncle. I don't think he will be able to want me to lose, without a doubt, but he's a professional and he's with another player. I don't know what's going to happen, if he's going to stay in the box or not, but I don't care. I have zero problem with that. So it's not a story at all for me," said Nadal. "I know the feelings that we have between each other. I know he wants the best for me. Now he's helping another player. But honestly, for me, it's zero problem, and I know he wants the best for me."

Should Nadal and world No.1 Novak Djokovic both win on Sunday, they will meet for the 59th time in the quarterfinals in what would be a rematch of their 2021 semifinal, won by the Serbian en route to the title. "He's (Auger-Aliassime) one of the players in better shape on the Tour, without a doubt," Nadal said of his opponent in the next round. "It's a Round of 16 (match). I know I have to play at a very high level to have chances to keep going. (It is) going to be a good test. In some way, that's what I need."

(The above story first appeared on LatestLY on May 28, 2022 11:51 AM IST. For more news and updates on politics, world, sports, entertainment and lifestyle, log on to our website latestly.com).