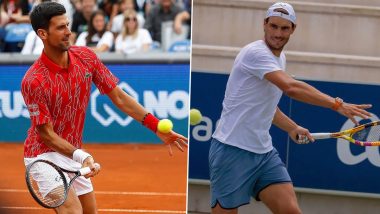 Rafael Nadal will face World No 1 Novak Djokovic in the final of men’s singles in French Open 2020. Nadal is chasing a record-equalling 20th Grand Slam title which will take him on level with Roger Federer (20) while Djokovic, a 17-time major winner, is looking to become the first man in the open era to win all four Grand Slam titles at least twice. The Serbian has been in terrific form in this year and has a win-loss ratio of 38-1 in 2020 but he has never beaten Nadal in a final at Roland Garros. Meanwhile, fans in India searching for how and where to watch the Novak Djokovic vs Rafael Nadal final match should scroll down for all details, including the live telecast and live streaming online on Hotstar. Iga Swiatek, Poland's 19-Year-Old Beats Sofia Kenin 6-4, 6-1 for French Open 2020 Title at Roland Garros.

Nadal beat Diego Schwartzman in straight sets to reach a record 13th final at the French Open. He has never lost a final at Roland Garros and leads Djokovic, who overcame Stefanos Tsitsipas in a five-set thriller in the semi-final, 2-0 in head-to-head meetings in the final here. A win will take Nadal level with Federer on 20 Grand Slam titles. Djokovic is three behind and can close down the gap with a first French Open title since 2016. Iga Swiatek Quick Facts: Here's All You Need to Know About the 19-Year-Old French Open 2020 Winner.

Novak Djokovic vs Rafael Nadal French Open 2020 final will be played at the Philippe-Chatrier Court in Roland Garros on October 11 (Sunday). The final of men’s singles has a tentative start time of 06:30 pm IST (Indian Standard Time).

(The above story first appeared on LatestLY on Oct 11, 2020 06:15 PM IST. For more news and updates on politics, world, sports, entertainment and lifestyle, log on to our website latestly.com).