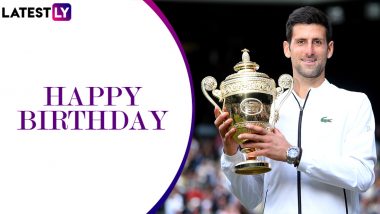 A 17-time Grand Slam champion, the current World No 1 and one Tennis’ greatest ever, Novak Djokovic celebrates his 33rd birthday on May 22, 2020 (Thursday). Born in a war-torn Yugoslavia in 1987, Djokovic dreamt of playing tennis after watching Pete Sampras on television. The legend goes that, his tennis journey took a turn after Jelena Gencic spotted him playing tennis at the age of six outside his father’s fast-food parlour. Genecic, famous for discovering and nurturing Monica Seles, took a young Djokovic under her wing and helped him train at her academy. She was also instrumental in sending Djokovic to Nikola Pillic’s academy in Germany to help his rapid development. Novak Djokovic Opens About Wanting to Quit Tennis in 2010 and Fighting Back Disappointing Defeats to Become 17-Time Grand Slam Champion.

Djokovic turned professional in 2003 and made his first Grand Slam appearance in 2005 at the Australian Open where he was defeated in the first round against Marat Safin. Interestingly, Australian open was the first Grand Slam title Djokovic won after beating Jo-Wilfried Tsonga in the final. His win also broke the monopoly of Roger Federer and Rafael Nadal in Grand Slams since 2005. Both Federer and Nadal would go on to become the Serbian’s fiercest rivals. The trio of Federer, Nadal and Djokovic is considered the big three in the tennis circuit. Take a look at some interesting facts about Novak Djokovic.

The Serbian has to date won eight Australian Open titles – the most by any the open era -- five Wimbledon, three US Open and one French Open Grand Slam. His count of 17 grand slam trophies makes his the third most decorated men’s tennis player in history after Federer (20) and Nadal (19). In addition to those he has also won five ATP Finals titles, 34 ATP Tour Masters 1000 titles and 14 ATP Tour 500 titles. He is the only male player to win all nine masters 1000 tournaments.

(The above story first appeared on LatestLY on May 22, 2020 07:35 AM IST. For more news and updates on politics, world, sports, entertainment and lifestyle, log on to our website latestly.com).