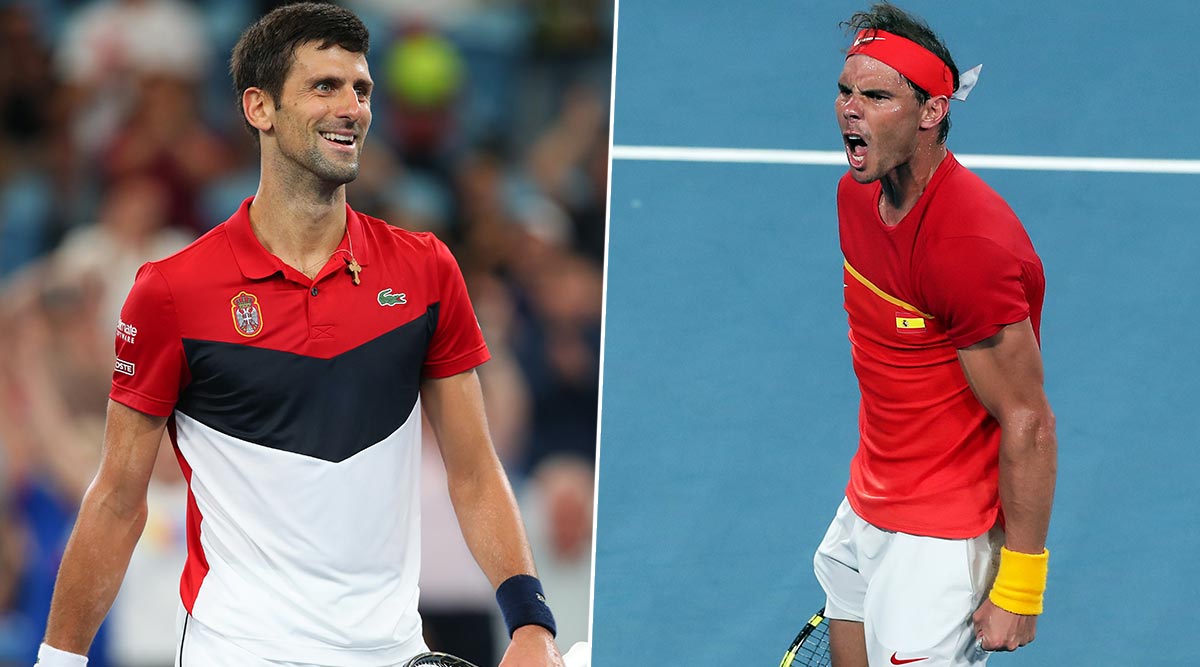 Rafael Nadal will battle Novak Djokovic in a blockbuster ATP Cup final when Spain and Serbia go head-to-head at the Ken Rosewall Arena on January 12, 2020 (Sunday) with eagerness and eye on the inaugural ATP title. Tennis Fans certainly couldn’t hope for a better start to the year with the world’s top-two players meeting in a final just a week before the season’s first Grand Slam. Rafael Nadal vs Novak Djokovic clash in the 2020 ATP Cup final will be the last and deciding contest of the ongoing tournament in Australia. Both Nadal and Djokovic have met each other 55 times in ATP tournaments with Djokovic leading the head-to-head records 28-26, which is far better when the H2H comes to hard court. Meanwhile, for information on the live telecast, online live streaming and live scores for the Novak Djokovic vs Rafael Nadal match in the 2020 ATP Cup final, please scroll down. Novak Djokovic vs Rafael Nadal, ATP Cup 2020 Final Match Preview: Clash of Titans in Serbia vs Spain Summit Clash.

Djokovic has been in fiery form at the 2020 ATP Cup and crushed Russia’s Daniil Medvedev 6-1/5-7/6-4 in the semi-final to take Serbia to the final. In the same stage, Nadal survived a scare before eventually beating Alex de Minaur 4-6/7-5/6-1 to set up a Serbia vs Spain final date for the inaugural ATP Cup title. But Nadal’s last win against Djokovic on hard courts dates back to US Open 2013. All of Djokovic’s wins in the ATP Cup tournament have come against top 15-ranked players, while Nadal lost to the only top 15 players he faced. ATP Cup Not a Tune-up for Australian Open, Says Rafael Nadal.

The Serb ran-out clear winner when both these Tennis greats last met down under in Australia. In the final of the Australian Open last year, Djokovic beat Nadal 6-3/6-2/6-3 to lift the season’s first Grand Slam after what was one of the most lopsided clash between these two. Djokovic has also been in superior form and is 6-0 in the tournament, which includes wins against Denis Shapovalov and Medvedev. Nadal, in contrast, is 5-1 with his only loss coming against David Goffin – the only top-15 ranked he has faced so far.

What is the Date, Time, Schedule and Venue of 2020 ATP Cup Final Novak Djokovic vs Rafael Nadal, Men’s Singles Match?

Novak Djokovic vs Rafael Nadal clash in 2020 ATP Cup final will be played at the Rosewall Arena in Australia on January 12, 2020 (Sunday). Djokovic vs Nadal men's singles encounter is scheduled to start at 02:20 pm in IST (India Standard Time).

Where to Watch the Live Telecast of Novak Djokovic vs Rafael Nadal, Men’s Singles Match of 2020 ATP Cup Final? Which TV Channels Will Broadcast it LIVE in India?

They have given fans some of the best matches in the last decade and there couldn’t be a better to a New Year for Tennis fans with a Novak Djokovic vs Rafael Nadal encounter even before the season’s first Grand Slam. But unfortunately, fans in India will not be able to watch the blockbuster final live on any television channels in India as there are no broadcasters available in India for the 2020 ATP Cup. Fans can, however, follow the game online.

Fans in India can watch the Novak Djokovic vs Rafael Nadal men’s singles clash live on TennisTV.com. The official Tennis site will be live streaming the final as well as the Djokovic vs Nadal final clash. Fans can visit the Tennis site and enjoy the live-action of the 2020 ATP Cup final, including the men’s singles match between Djokovic and Nadal which promises to be a deciding encounter.

Nadal vs Djokovic encounter will, however, be the second match of the 2020 ATP Cup final with Dusan Lajovic vs Roberto Bautista Agut singles match opening the final between Serbia and Spain. The match will be followed by the Djokovic vs Nadal match. The World No 1 and 2 men’s singles player will partner their compatriots for a doubles match later. Nadal will partner Pablo Carreno Busta, while Djokovic will join forces with Viktor Troicki for the final match of the 2020 ATP Cup tournament.