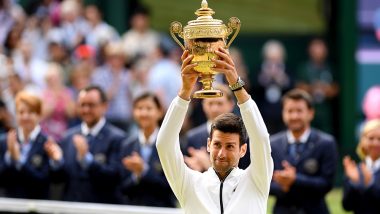 The 2019 Wimbledon final played between Roger Federer and Novak Djokovic proved to be a classic and the longest men's singles final match ever played in Wimbledon final. The five set thriller, with the last set going to tie break after 12-12, was won by Novak Djokovic. The Serbian won all the three sets in tie break as there was little to separate the players on a memorable day and in an unforgettable match. Djokovic finally prevailed with the scorecard reading 7-6 (7-5), 1-6, 7-6 (7-4), 4-6, 13-12 (7-3). This was defending champion Novak Djokovic's 16th Grand Slam title. Djokovic also saved two match points in fifth set to become first man to win a grand slam saving a match point.

Djokovic is now the only male player in Open era, to defend his Wimbledon title after 30 years of age. This match broke the record for the longest Wimbledon final which was played in 2008 between Roger Federer and Rafael Nadal. In that match too, Federer ended up on the losing side after the match lasted for 4 hours and 48 minutes. The Sunday's final lasted 4 hours and 57 minutes, nine minutes more than the 2008 final. The Djokovic vs Federer final was the first 12-12 tiebreaker in a Wimbledon final.

The Serbian became the first male player in Open Era (over age 30) to successfully defend a Wimbledon title.

Roger Federer and Novak Djokovic were playing against each other for the 48th time in their career. Djokovic leads Federer 26-22 in these matches and head to head games.

This was also the 16th time that Djokovic and Federer were facing one another in a Grand Slam match, breaking the previous record (15) held by Nadal and Djokovic.

After this match, at Wimbledon, Federer and Djokovic have locked horns four times, with Djokovic leading Federer 3-1 at the Grass court championship. Novak Djokovic now has 16 Grand Slam titles, and is only two behind Rafael Nadal (18) and has four less than Roger Federer (20). However, the 32-year-old Djokovic is the youngest among the big three with Nadal at 33 and Federer turning 38 next month.

(The above story first appeared on LatestLY on Jul 14, 2019 11:54 PM IST. For more news and updates on politics, world, sports, entertainment and lifestyle, log on to our website latestly.com).