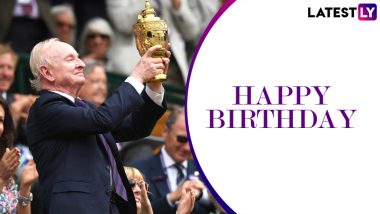 Regarded by many as one of the best Tennis players of his generations, Rod Laver celebrates his 82nd birthday today (August 9, 2020). He is one of the most decorated players in the tennis history and was No. 1 ranked professional from 1964 to 1970, making him the top-ranked player for three years after the start of Open Era in 1968. So as the tennis legend turns a year older, we take a look at some lesser-known facts about him. Coco Gauff Wants to Meet Former Tennis Ace Rod Laver, Australian Tennis Great Says, ‘Would Love to Meet her’ (Watch Video).

Born in Queensland, Australia, Rodney George Laver is considered as one of the greatest players in the history of the sport. Laver played before and during the open era and has won the career grand slam in both the era’s first in 1962 and then in 1969. He has won a total of 11 Grand Slam singles honours which includes four Wimbledon titles, three Australian Opens and French Open and US Open on two occasions each.

(The above story first appeared on LatestLY on Aug 09, 2020 08:30 AM IST. For more news and updates on politics, world, sports, entertainment and lifestyle, log on to our website latestly.com).