The Swiss tennis star would be hanging up his boots and ending an illustrious career after announcing his retirement from the sport a few days ago. Federer nonetheless, aims to walk out on a high while partnering Rafael Nadal, his long-time rival and friend. 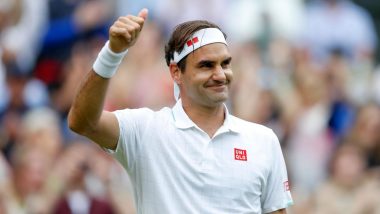 Retirement-bound Roger Federer is set to put an end to his glorious career by competing in doubles competition and not singles matches, at the Laver Cup 2022. He also stated that he intends to partner Rafael Nadal, one of his rivals and friend, in doubles competition.  The Swiss maestro sent social media into a milestone when he announced that he would be retiring from professional tennis at the end of the Laver Cup 2022 tournament. Persistent problems in the knee and also growing age are believed to have been the reason. Roger Federer Retires: List of the Tennis Legend's Grand Slam Wins Throughout the Years

That he would only compete only in doubles competition was confirmed by him, who said, "I am quite surprised how well I am playing in practice here. But it was already clear beforehand that I would only play doubles, probably on Friday evening. That's why playing the Swiss Indoors in Basel was no longer an option."

"It's an event I don't want to mess with, but I know my limitations..I asked [Europe captain] Bjorn [Borg] if I could play one doubles, on Friday night, then Matteo comes in," Federer told a news conference. I'm nervous, I haven't played in so long," he added. Federer thus would be playing his final game of tennis on Friday.

The 20-time Grand Slam champion could thus be in action for the final time in his professional tennis career and it would be even better if it ended with a victory.

(The above story first appeared on LatestLY on Sep 21, 2022 08:00 PM IST. For more news and updates on politics, world, sports, entertainment and lifestyle, log on to our website latestly.com).