Defending champions Great Britain, who scored a 2-0 shoot-out victory against Spain in the quarterfinals on Monday, have set up a semifinal clash against the Netherlands. 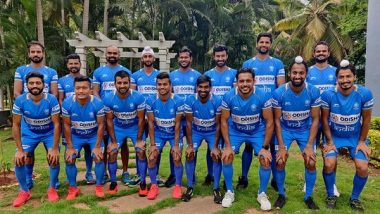 Tokyo, August 2: Defending champions Great Britain, who scored a 2-0 shoot-out victory against Spain in the quarterfinals on Monday, have set up a semifinal clash against the Netherlands. It would be a repeat of the 2016 Olympics final in which the British emerged winners to bag their first gold in women's hockey at the Olympics. World, European, and Pro League champions the Netherlands outplayed New Zealand 3-0 in the quarterfinals on Monday, thus getting a chance to avenge their 3-0 shootout defeat to Great Britain in the 2016 final.

In the other semifinal on Wednesday, India will meet two-time silver-medallist Argentina, who defeated Germany 3-0 in the first match on Monday. With the women's semifinalists decided on Monday, India have emerged as the only country to make it to the last-four stage in both men's and women's sections. Team India at Tokyo Olympics 2020 Schedule for August 3: Check Out Full Schedule, Timings, Events & Live Streaming Details For Day 11.

Besides India, Australia, Belgium, and Germany have reached the semis in the men's section. Great Britain, Netherlands and Argentina alongside India make the semis lineup in the women's section.

The Indian women defeated Australia 1-0 on Monday while the men overcame Great Britain 3-1 on Sunday. Thus both have a chance of winning their respective matches and making it to the final.

Belgium, the reigning world champions will be looking to win their maiden Olympic gold after finishing with silver in the 2016 edition after losing to Argentina in the final.

(The above story first appeared on LatestLY on Aug 02, 2021 10:54 PM IST. For more news and updates on politics, world, sports, entertainment and lifestyle, log on to our website latestly.com).